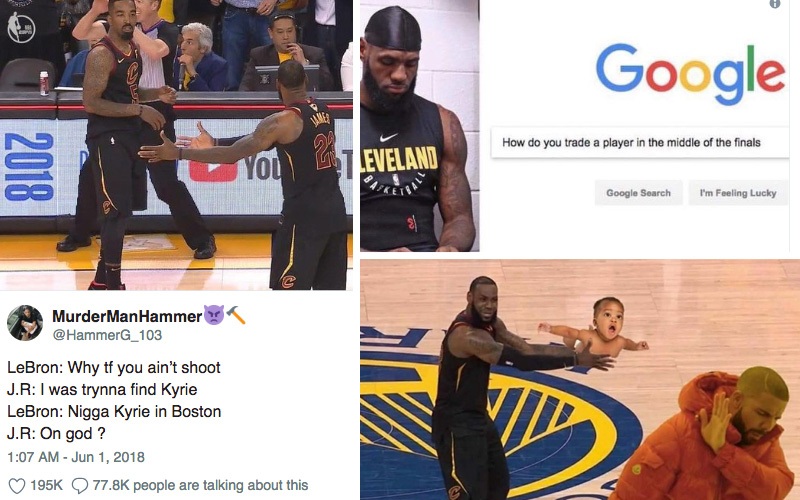 When you f**k up your team’s chances of winning the first NBA Finals matchup, you can expect to become the butt of endless jokes and the subject of countless memes all over the Internet. We’re talking about you, J.R. Smith!

The last minute of Thursday night’s (May 31) Game 1 of the 2018 NBA Finals was pretty wild, to say the least. First, the refs questionably overturned a charge on Kevin Durant. Then, George Hill of the Cavaliers had a chance to win the game with two free throws, of which one he missed. But when J.R. Smith retrieved the rebound, that’s when sh*t hit the fan.

With less than 5 seconds remaining, and the Cleveland Cavaliers and the Golden State Warriors tied at 107, J.R. Smith grabbed an offensive rebound off George Hill’s missed free throw and had a chance to win the game.

But instead of taking a shot or passing it to another teammate to attempt a shot, Smith took the ball out beyond the arc just as the shot clock expired, as if his team had the lead and he was trying to run the clock out or draw a foul. LeBron’s reaction was priceless: Smith’s blunder forced the game into overtime, and the Warriors ended up taking a 1-0 series lead with a 124-114 victory. After the game, there were conflicting explanations for Smith’s terrible decision at the end of the fourth quarter.

“He thought we were up one,” Cavs coach Tyronn Lue said. But Smith said he knew what the score was. “I was trying to get enough to bring it out to get a shot off,” Smith told reporters. “I knew we were tied; I thought we were going to call timeout. If I thought we were ahead, I’d have held on to the ball and let them foul me.”

Regardless of what Smith “thought,” he f**ked up bad. REAL BAD. And the memes were swift, brutal, plentiful, and, above all, HEE-LARIOUS.

LeBron on his phone… pic.twitter.com/5jiquRxg3v

“We just left a rest stop! Why didn’t you go then?” pic.twitter.com/ExXXogeocs

“When I leave Cleveland a second time, I’m going in this direction.” – @KingJames pic.twitter.com/wQLaQmBIpd

“I asked you what you wanted to eat 20 minutes ago. How do you still not know?!” pic.twitter.com/Rx2cIM4V0y What if JR Smith saw 14 million possible outcomes and this is the only way the Cavs win this series? pic.twitter.com/fN4uuylNeK

Just in case some of you need psych help after last night’s game pic.twitter.com/iKvTaodxe3

The World "JR Smith what happen?!"

They're being so disrespectful to JR Smith LMAO pic.twitter.com/NH0exNBEAC

Instant replay of JR Smith and LeBron in the closing seconds of regulation. pic.twitter.com/8qYCv7mBQf

“I thought we were ahead.” – JR Smith pic.twitter.com/OjCt4VMCEj

Thank you JR Smith you have me laughing so much right now pic.twitter.com/jkUGPbUyfx

when you drop 50 in a Finals game that will forever be known as that time JR Smith forgot the score pic.twitter.com/l7Lba5uTyR