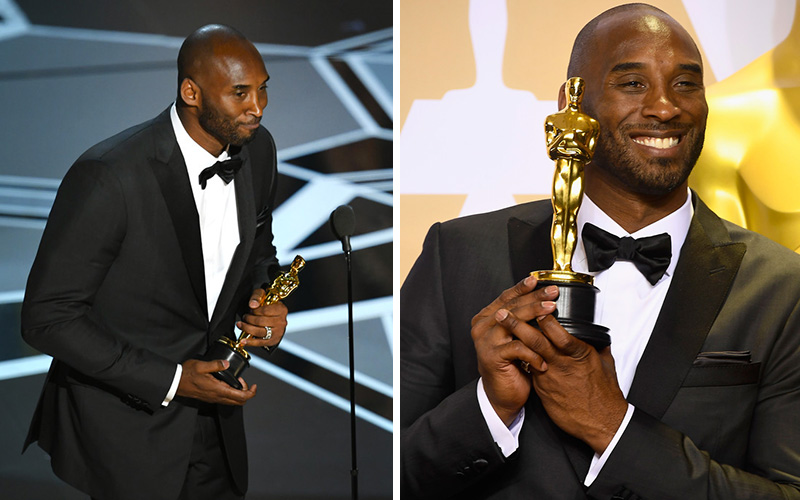 Kobe Bryant can add another huge accomplishment to his resume: Oscar winner!

The retired NBA star took home the highly coveted golden statue Sunday night (Mar. 4) in the animated short film category for his work as a writer and the executive producer of “Dear Basketball.” The 5-minute movie, which was also narrated by Bryant, is based on a poem he wrote for The Players’ Tribune in 2015 announcing his retirement from basketball.

In his acceptance speech, Bryant made it a point to slide in a little dig at Fox News host Laura Ingraham for telling LeBron James to “shut up and dribble” in response to James criticizing Donald Trump.

“I don’t know if it’s possible, as basketball players we’re really supposed to shut up and dribble. I’m glad we do a little bit more than that. Thank you, Academy, for this amazing honor. Thank you John Williams for such a wonderful piece of music. Thank you Verizon for believing in the film. Thank you Molly Carter, without you we wouldn’t be here and to my wife Vanessa and to our daughters Natalia, Gianna and Bianka…you are my inspiration.”

This is a historical moment for Kobe Bryant, who is the first NBA player to win an Academy Award. His former teammate Shaquille O’Neal even congratulated him on Twitter for his accomplishment.

Congrats to KOBE first Oscar that’s big bro #dearbasketball. Proud of you, Big honor for you and your family. I’m jealous lol