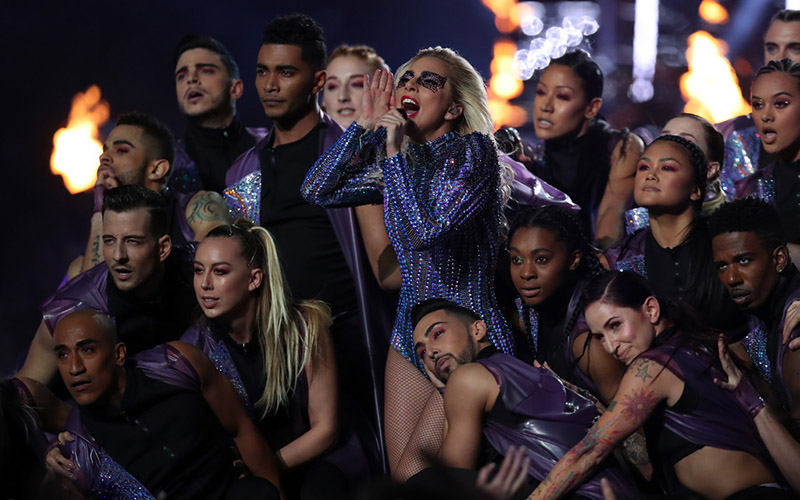 Last year, she performed the Nation Anthem, and this year Lady Gaga took the center stage. Gaga headlined the 2017 Super Bowl Halftime Show in Houston and made football fans and little monsters alike lose their minds. The woman literally bungee jumped from the rooftop of the stadium!

Gaga began her epic performance by singing “God Bless America” and snippets from other patriotic songs on the roof of the stadium (a nod to the current tense political climate). With the American flag behind her, she bungee jumped and perfectly transitioned into “Edge of Glory.” Singing a few more of her hits, Gaga finally landed on the stage and performed “Born This Way.”

Wait a minute, “Telephone?” Is Queen Beyonce about to make an appearance?

Well, that was anticlimactic. Beyoncé must be too busy creating life two times over in her magical womb.

Anyways, the show must go on. Gaga continued the performance with “Just Dance” and danced through the crowd on the field. She slowed it down a little bit by singing “Million Reasons” at the piano, even adorably shouting out her mom and dad.

She threw down her mic, caught a football, and ended the halftime show much like it began, by jumping off the stage and out of the camera’s view.

All-in-all, it was a solid performance. Unlike recent halftime shows, Gaga chose not to have any guest performers, which is a welcomed change. (Although I would’ve loved to see Queen Bey slay for a few seconds). Little monsters and Gaga, herself, should be very proud of this once-in-a-lifetime moment.