GOSSIPONTHIS.COM Sports WATCH: Ronda Rousey Knocked Out by Amanda Nunes in 48 Seconds at... 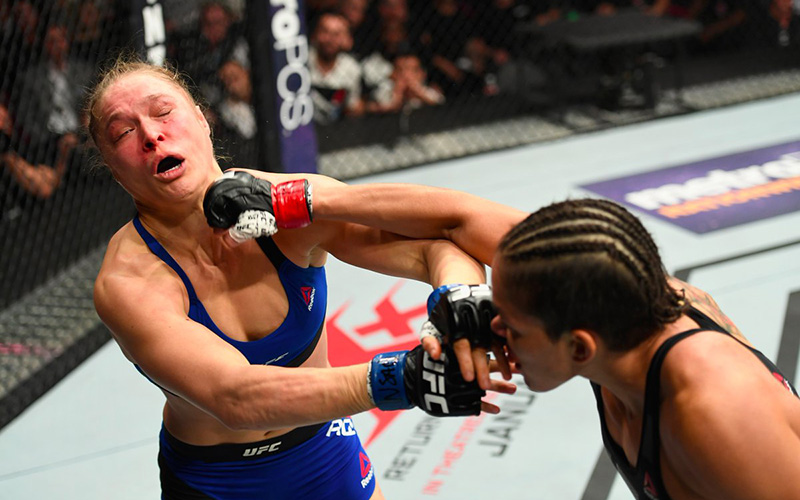 The world has been waiting over a year to see Ronda Rousey fight after her shocking loss to Holly Holm at UFC 193 in November 2015, and in the weeks and days leading up to her UFC 207 matchup with Amanda Nunes Friday night (Dec. 30), Rousey promised she was going to deliver.

But it looks like fate had other plans, because Ronda Rousey got KNOCKED THE F**K OUT. And it all happened within just the first minute of the fight!

Yes, you read that right. Ronda Rousey not only lost the match, but she did so WITHIN THE FIRST MINUTE. (YIKES!)

Amanda Nunes basically PULVERIZED Ronda Rousey from the start of the fight, and Rousey lost by TKO after a mere 48 seconds. (48 SECONDS, Y’ALL!!! WTF?!?)

To put that in perspective, here’s a short list of things that take longer than the Rousey vs. Nunez fight did:

The good news? Rousey earned a whopping $3 million for the fight … even though she got the life knocked out of her. The bad news? This could possibly be the last fight of her career, because there’s no coming back from this.

And of course Twitter is letting Ronda Rousey HAVE IT:

To be fair Ronda Rousey won the electoral college vote

Media: "Ronda Rousey is the greatest female athlete of all time!"