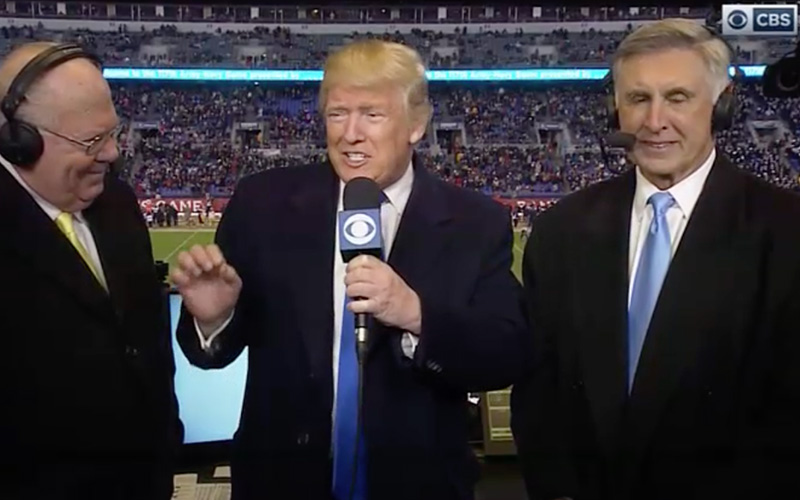 So yesterday the Army and Navy football teams met on the gridiron for their annual rivalry game, and they had one special guest in the audience: their future boss, Donald “Still Can’t Believe He’s Our President” Trump.

That’s right, the man who in just six weeks’ time will be leading our armed forces attended the game and decided to stop by the broadcast booth for a quick Q&A. So, what were his thoughts on the game?

“I just love the armed forces. Their spirit is incredible. I don’t know if it’s necessarily the best football, but boy do they have spirit more than anybody. It’s beautiful,” Trump said.

Now, I’m not going to say this was the best game ever, but the 20-17 Army victory (the first army victory since 2001) surely wasn’t a snooze-fest. The Donald, however, was less than impressed with what he saw unfold on the field.

I mean come on, the only thing positive he could say was, “their spirit is incredible.” Anyone who’s ever played sports knows that’s an insult. It’s like, “well you lost, but you played hard,” or “at least you gave it your all.” I get it, you don’t have to patronize me.

And it’s especially bad coming from Trump as he is soon-to-be the person who is in charge of everyone who was on the field yesterday. But I guess in a Trump presidency, nothing instills confidence quite like bashing your employees. I guess I shouldn’t be surprised, though. This is, after-all, the same guy who had a whole television series based off of that premise.

Hopefully The Don man can be a little more encouraging when he inevitably leads us to war with Russia, because, “you have incredible spirit” isn’t quite the rallying cry our armed forces are hoping for, I’m guessing.