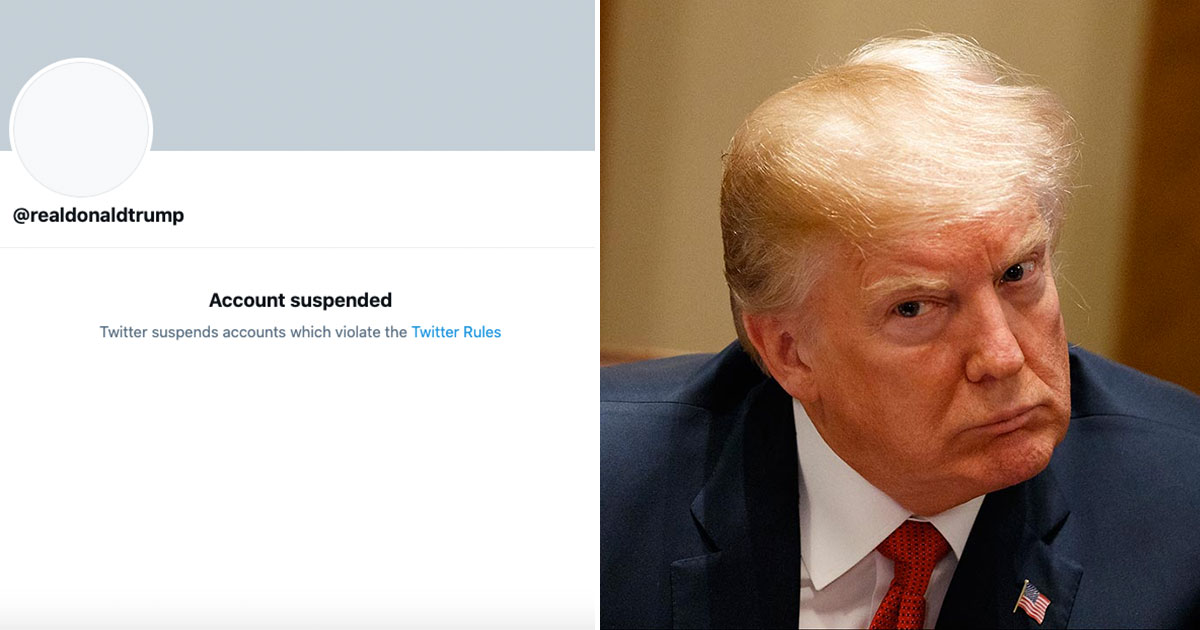 Twitter announced Friday (Jan. 8) that they have “permanently suspended” President Donald Trump’s account days after a mob of his supporters stormed the U.S. Capitol and took over the building, leaving a trail of blood and destruction and claiming the lives of at least five people.

The popular social media platform said in a statement: “After close review of recent Tweets from the @realDonaldTrump account and the context around them we have permanently suspended the account due to the risk of further incitement of violence.”

After close review of recent Tweets from the @realDonaldTrump account and the context around them we have permanently suspended the account due to the risk of further incitement of violence.https://t.co/CBpE1I6j8Y

“The 75,000,000 great American Patriots who voted for me, AMERICA FIRST, and MAKE AMERICA GREAT AGAIN, will have a GIANT VOICE long into the future. They will not be disrespected or treated unfairly in any way, shape or form!!!”

“To all of those who have asked, I will not be going to the Inauguration on January 20th.”

Due to the ongoing tensions in the United States, and an uptick in the global conversation in regards to the people who violently stormed the Capitol on January 6, 2021, these two Tweets must be read in the context of broader events in the country and the ways in which the President’s statements can be mobilized by different audiences, including to incite violence, as well as in the context of the pattern of behavior from this account in recent weeks.

We assessed the two Tweets referenced above under our Glorification of Violence policy, which aims to prevent the glorification of violence that could inspire others to replicate violent acts and determined that they were highly likely to encourage and inspire people to replicate the criminal acts that took place at the U.S. Capitol on January 6, 2021.

This determination is based on a number of factors, including:

President Trump’s statement that he will not be attending the Inauguration is being received by a number of his supporters as further confirmation that the election was not legitimate and is seen as him disavowing his previous claim made via two Tweets (1, 2) by his Deputy Chief of Staff, Dan Scavino, that there would be an “orderly transition” on January 20th.

The second Tweet may also serve as encouragement to those potentially considering violent acts that the Inauguration would be a “safe” target, as he will not be attending.

The use of the words “American Patriots” to describe some of his supporters is also being interpreted as support for those committing violent acts at the US Capitol.

The mention of his supporters having a “GIANT VOICE long into the future” and that “They will not be disrespected or treated unfairly in any way, shape or form!!!” is being interpreted as further indication that President Trump does not plan to facilitate an “orderly transition” and instead that he plans to continue to support, empower, and shield those who believe he won the election.

Plans for future armed protests have already begun proliferating on and off-Twitter, including a proposed secondary attack on the US Capitol and state capitol buildings on January 17, 2021.

As such, our determination is that the two Tweets above are likely to inspire others to replicate the violent acts that took place on January 6, 2021, and that there are multiple indicators that they are being received and understood as encouragement to do so.

The ban comes after Trump incited a riot Wednesday (Jan. 6) that saw pro-Trumpers breaking into the U.S. Capitol building in D.C. and disrupting Congress’ certification of Joe Biden as the President-elect.

Twitter had initially placed a 12-hour ban on Trump’s account due to “repeated and severe violations of our Civic Integrity policy” after he refused to stop posting lies about the election being stolen from him.

Twitter threatened at the time to permanently ban his account for continued violations of his rules, including those regarding civic integrity and violent threats.

Facebook on Thursday (Jan. 7), banned Trump indefinitely, saying that the ban would last at least through Inauguration Day.

Facebook CEO Mark Zuckerberg said the risks “are simply too great” to allow Trump to keep using their platform after he incited “violent insurrection against a democratically elected government.”

People have been telling Facebook and Twitter for YEARS to get this man off their platforms, and it took a mob of Trumptards taking over the Capitol for them to finally listen.

Better late than never, we guess…