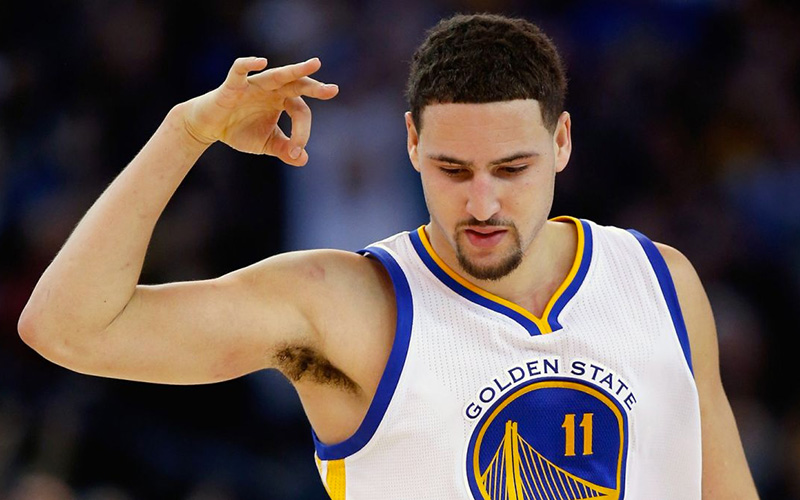 This is why the Warriors are so dangerous. Everyone knows that Steph Curry can put the game on his back, and Kevin Durant has made a name in the league as a team leader and big time scorer. Well, it turns out Klay Thompson has no problem helping out his fellow guards and just taking over a game.

That’s exactly what he did last night against the Pacers. Thompson became the talk of the NBA after scoring 60 points in the 142 – 106 win, but what makes this most impressive is that he did it in just 29 minutes. That’s right, the dude scored 60 and he didn’t even play in the fourth quarter.

Not surprisingly, as the game rolled on, the reactions rolled in across social media, including from some of his own teammates.

Gotta try to cool him down somehow. #Klay pic.twitter.com/GF4HYRQ7ry

This guy next to me was on ???today. 60 points?
Way to go my man @KlayThompson pic.twitter.com/P55oh9s4TA

Steph Curry on Klay's 60 points in 29 minutes: "I'll put money on it, it'll never be touched again in the history of basketball."

My fave part about Klay's 60 pt game tonight is that he only played 29 mins, had 0 turnovers and went 10/11 from the FT Line. #DubNation

Klay's done. Oracle erupts. What a performance. 60 in 3 quarters.

And of course, there’s always going to be the haters saying it’s not as good as Kobe or the legend himself, Wilt.

Great to have had Kobe on the Lakers.

Wilt Chamberlain scored 100 in a game everyone

Regardless of what they say, though, last night was an unreal performance by Thompson, and I, for one, can’t wait to see if he can keep it going when they play the Clippers later this week.