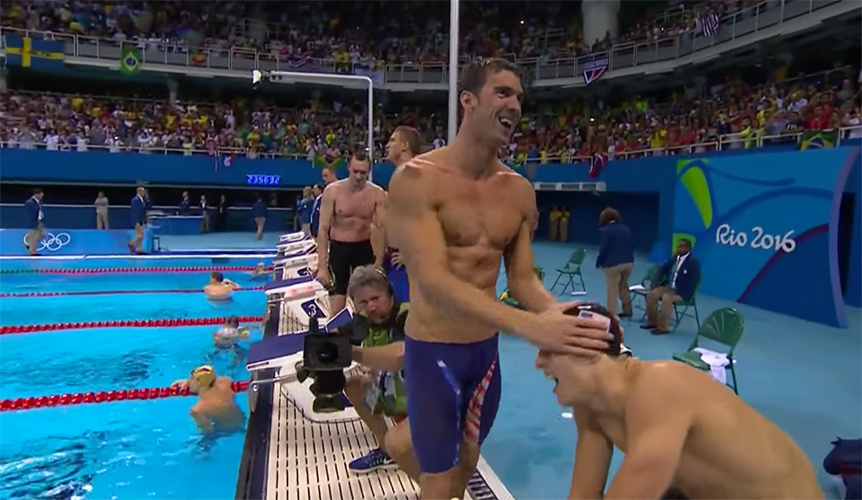 You might not have heard this yet, but Michael Phelps crushed it on Sunday night (Aug. 7) at the 2016 Olympic Games in Rio and secured ANOTHER gold medal for himself. If you haven’t been counting, that brings his gold-medal total to a jaw-dropping 19.

If you missed the moment when Phelps and Team USA knocked out the rest of the competition in the 4×100 freestyle relay, here it is:

So, yes, Michael Phelps is a living legend. He is the human heir to Poseidon’s throne if you will. Actually, he might be part-merman at this point.

But there are a few more things that make Michael Phelps cool besides his unstoppable swimming talent. Get to know a little more about the man behind the gold medal and understand why he’s really the man.

1Michael Phelps Gets His Hair Cut in a Black Barber Shop

Black men know that when it comes to getting your hair cut, if you want to stay on trend and avoid follicle disaster, it’s a must that you find a trustworthy black barber. White folks might not know this, but quiet as its kept, black barbers are some of the sickest in the game when it comes to haircutting. Someone must’ve hipped Michael Phelps to the game though because he snapped this pic of the barbershop crew that got him fresh for his appearance in Rio. Did you get the fade or box in the back, Mike?

2Michael Phelps Knows How to Take a Selfie

While training for the Olympics is no joke, having fun with fans and teammates on social media sure is. The nice thing about Michael is that he’s down for a silly selfie with the crew. Which is a relief because there’s nothing worse than a bratty, self-centered celebrity who can’t be bothered to be generous with their time and spirit with others. Yes, I’m talking about you, Justin Bieber.

3Michael Phelps Has His Own Emoji

OK, yes. EVERY celebrity has their own emoji these days thanks to Kim Kardashian West hipping everyone to the game. But still, getting his Phelpsmoji out just in time for the Olympic Games was brilliant marketing on his part. Especially since he’s already racking up more gold medals.

It’s one thing to get a good selfie together, but adding underwater photography to his list of accomplishments is quite impressive.

5Michael Phelps Is Friends With Other Sports Greats

Just like we like our pop stars to be BFFs with one another, so too do we like our sports stars to bro out. Michael Phelps is a longtime friend of Kobe Bryant’s and when the basketball star announced his retirement, Phelps shared this photo of the two of them in honor of Kobe’s legacy and their longstanding friendship.

OK, not only does Michael Phelps get his hair cut by black barbers, but he also enjoys Kevin Hart’s standup comedy? The swimming superhero snapped this pic of him and his baby mama hanging with Kevin Hart backstage after one of his shows. We see you, playa.

7Michael Phelps Is a Doting Dad

Recently, Michael Phelps become the proud father of a baby boy named Boomer. His Instagram feed has since become populated with photos of him playing the part of a doting father. It’s nice to see a professional athlete love on his offspring rather than war with his baby mama or dodge child support payments like OTHER professional athletes, who shall go unnamed.

8Michael Phelps Is Teaching Black Kids How to Swim

Like tennis, it’s no secret that swimming is viewed largely as a “white” sport. It’s also not a secret that a lot of black folks can’t swim. But as a native Baltimorean, Michael Phelps is giving back to the community by encouraging kids in the city to get over their fear of water and learn an important life-saving skill and sport.

9Michael Phelps Is a Mama’s Boy

Eminem might have fooled you and made you think that all white boys hate their mothers, but that’s not true and Michael Phelps is a shining example of what a good son looks like. Raised by his devoted and supportive mother, Deborah Phelps, Michael openly and frequently thanks her for everything and credits her with his success.