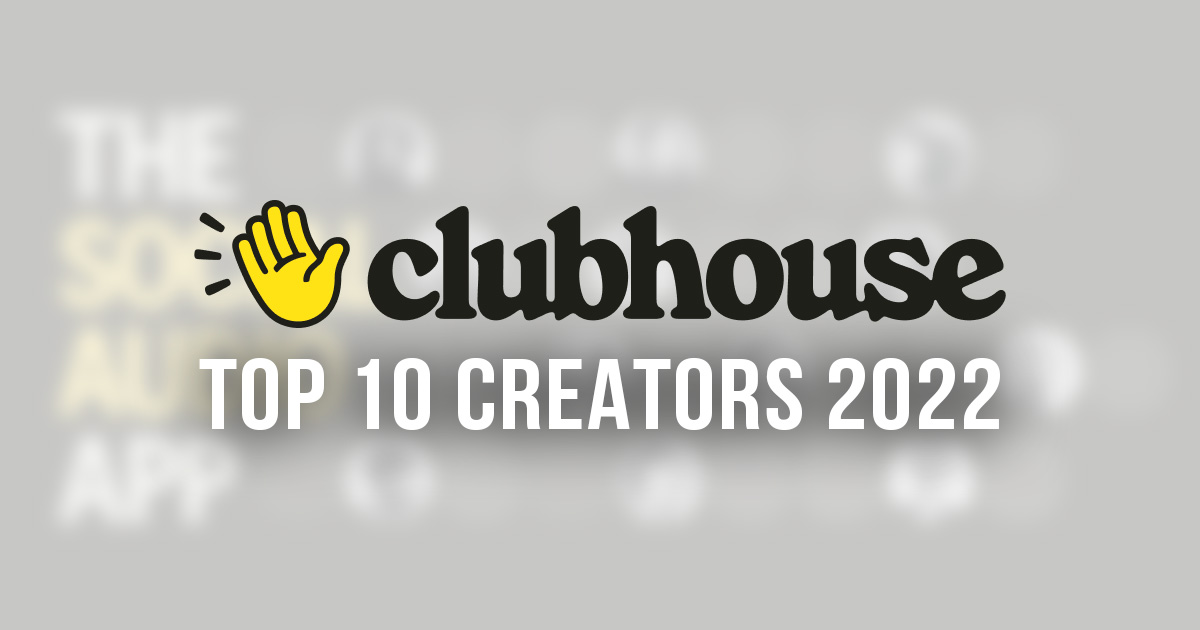 While it’s no secret the popular social audio application Clubhouse has experienced some changes since its early days during the height of the pandemic, there’s a creative group of individuals keeping the platform true to its roots. Allow us to introduce you to Clubhouse’s top creators list of 2022.

At one point, everyone was talking about Clubhouse, as it quickly became the hot new social media app. The uniqueness of the platform has spawned many imitators (like Twitter Spaces, for example), but fortunately for Clubhouse, it has somewhat of a cult-like following of loyal users who are only interested in Clubhouse and Clubhouse only.

Those extremely loyal Clubhouse users split their time on the app between conversing with each other in social and private invite-only rooms, and also participating in larger, public rooms hosted by a dedicated group of entertaining content creators. Depending on whose room you’re in, you could be learning about real estate, crypto, or financial literacy, playing a game, listening to drama rants, discussing current events, or getting relationship advice.

Because the rooms shown to users are primarily based on who they follow, if you’re not following the right people, the app can become boring and mundane pretty quickly, especially after the novelty wears off. Fortunately for you, we put together a list of the top room creators … basically the people you should be following to keep the app fun, interesting, and engaging.

Starting off our list is Mr. Freddy Roosevelt, the most mysterious and animated personality on Clubhouse. After being suspended on multiple occasions, Freddy has returned every time like a phoenix to continue his trend of creating the most controversial rooms on the social audio app. His loud personality, catchphrases, and ability to control the mic has elevated him to star status on Clubhouse. On top of it all, no one knows who the real Freddy Roosevelt is nor his true identity. “Hello?!!”

Aayan X debuted on Clubhouse at the top of the year and has taken the app by storm. This personality has brought the energy of The Shade Room in social audio form and has hosted some of the biggest rooms with the best tea. On top of that, everyone loves Aayan until they don’t … then Aayan will quickly let them know about themselves.

The Rundown is one of the most versatile and innovative creators on Clubhouse. After being voted favorite creator on Clubhouse in 2021, he has since spent a lot of his focus teaching people financial literacy while helping his cryptocurrency community monetize through his Lil’ Hippo NFT project. The Rundown has a long history of running top Clubhouse rooms including celebrity interviews, interactive games, talent shows, creator town halls, and much more!

Wack 100 is no stranger to controversy. This larger-than-life personality has absolutely shaken up the world of Clubhouse with some of the most memorable and hottest conversations. Already famous outside the app, Wack has been able to attract his celebrity friends to rooms where the conversation has attracted some of Clubhouse’s most viral moments. Wack 100 has also helped many creators establish their following using his own platform.

Don Prez has sparked an entirely unique and new culture on Clubhouse by coining the phrase “The Dark Side.” His “The Prezidential Suite” club and rooms attract thousands of people with controversial topics, Clubhouse recap rooms and much more. Don Prez has stepped into Clubhouse veteran status along with his counterparts as they have introduced a new side to Clubhouse for over a year.

Donte Brooks has positioned himself as a top conversation curator and creator through his “House of Hustle” club. Donte has hosted some of the top relationship advice rooms giving insight into all sides of love. Donte has also been hosting various types of empowerment rooms giving his audience the ability and access to share great conversations.

Kim Cutz is a unique personality you never want to cross. She has been known to host Clubhouse’s biggest rants and controversial spaces. Her personality is favored by many around the social audio app as she is very outspoken, straightforward, and talks her truth.

Hocus 45th also debuted at the top of the year on Clubhouse and his “Rabbit Hole” club has quickly claimed its position as one of the best nightly rooms on the app. He often attracts many intellectual personalities over thought-provoking conversations and hosts rooms that bring many together.

Rocky Rock is of the longest-lasting and loyal creators on Clubhouse. His “Sleepless in LA” club has created a unique family within the social audio app while representing the essence of the city their community shares, Los Angeles. Rocky has also hosted some of Clubhouse’s largest spaces with his counterparts and friends.