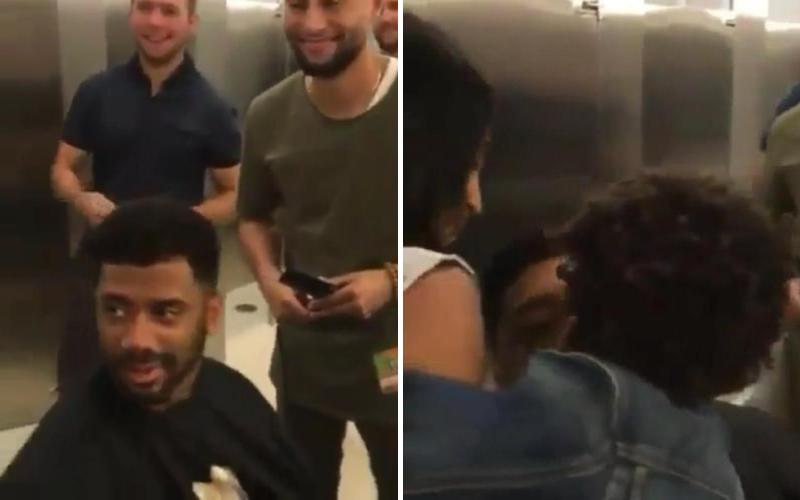 Welp … Ciara, Russell Wilson, and Baby Future are officially a family of three and Future’s fans are fuming. During a Facebook Live session with the couple, Baby Future seems to call Wilson “Papa” and gives his new stepdaddy a kiss.

yoooo I'm not even a dad and that Baby Future "papa kiss" video hurt me lmfao can't blame Russ tho, he's obviously good to the kid but DAMN

Hahaaaa Ciara out here ruthless af. Why would you post a video of that man's son calling someone papa Russell. No respect

who put out the video of baby future callin russell wilson "papa" …. whats that all about ?? That aint mature …. smfh

However, there were plenty of people who didn’t see anything wrong with the blended family bonding.

Honestly baby future calling Russell papa just goes to show who's had more of an influence on his life.

Baby future on his own said Papa Russ. It wasn't rehearsed or staged. Future is the absence. Russ has filled the void. It's simple

There is nothing wrong with baby future calling Russell papa. Stop it.

So exactly why are ppl mad about baby future calling Russ papa????

Future has yet to respond to or acknowledge the video. But it’s safe to say he’s probably not too happy to see his son calling another man “papa.” The rapper and Ciara have constantly been at odds and are in the middle of a custody battle.

Ciara also has filed a $15 million defamation lawsuit against Future for suggesting she was a bad mother. She recently added to the suit, stating that she was afraid he would try to hurt Wilson in some way.

A two-year-old toddler calling his stepfather “Papa Russ” should not be that big of a deal. But of course, we’re dealing with very messy celebrities and their fans. I’m not going to claim Future is an absentee father like some on Twitter. However, we shouldn’t complain that Ciara married a man who cares for her son and Baby Future cares for him.