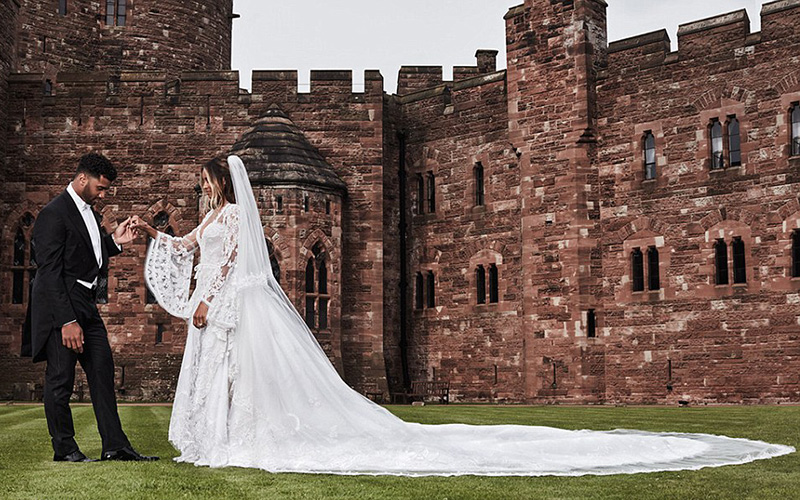 Thanks to Russell Wilson, Ciara finally got the fairytale wedding she had hoped for when she became engaged to Future. Wilson and the singer tied the knot Wednesday (Jul. 6) at the Peckforton Castle in England.

Though guests were banned from leaking any info, we’re now learning more details about the ceremony. Official photos from the ceremony have been also been released and you must see the gorgeous couple on the special day. Ciara’s breathtaking cathedral-length gown was a custom Roberto Cavalli piece, personally designed by the label’s creative director Peter Dundas. Her shoes were also the result of a collaboration between herself and Giuseppe Zanotti. Wilson’s suit was custom designed by Giorgio Armani. The father of the bride also donned Armani and the designer even made a special “little man suit” for Ciara’s 2-year-old son, Baby Future Zahir. Ciara and Wilson had eight bridesmaids and eight groomsmen. Bridesmaids included Kelly Rowland and Lala Anthony. Ciara really went all out for her fairytale wedding, too. Each bridesmaid had custom-made gowns by Michael Costello. The designer confirmed that Ciara made sure that each dress showcased each wearer’s individual personality. The groomsmen wore Armani just like Wilson.

We’ve also learned that Earth, Wind & Fire introduced the couple during the reception. The 100 guests reportedly partied until dawn with music provided by DJ Nabs. Maybe that’s why the newlyweds were looking all wore out the next morning. Oh, who am I kidding? We know exactly why they were tired! The ceremony looked like a dream come true. Congrats to the happy couple. Let’s hope the marriage lasts a lifetime full of joy.