GOSSIPONTHIS.COM Celebs Ciara and Russell Wilson Are Now Husband and Wife, Can Finally Have... 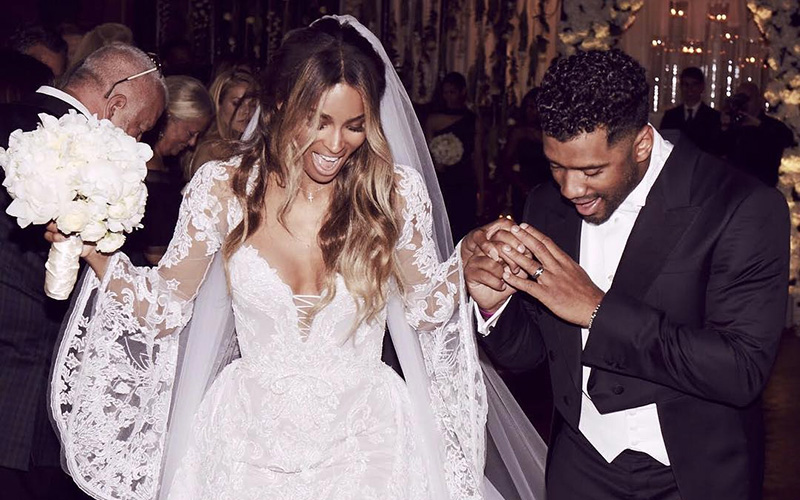 Umm, who gets married on a Wednesday? In any case, congratulations are in order for Ciara and Russell Wilson. Or should I say Mr. & Mrs. Wilson. The two have officially tied the knot.

The singer and NFL star wed today (Jul. 6) at the Peckforton Castle in Liverpool, England. Ciara wore a custom Roberto Cavalli gown, while Russell wore an all black suit.

There were 100 guests in attendance. Jennifer Hudson, Lala Anthony, Kelly Rowland, and Serena Williams (who’s currently a semi-finalist at the 2016 Wimbledon Championships) were among Ciara’s bridesmaids. Guests were also reportedly asked to hand over cell phones to ensure privacy.

Ciara and Russell Wilson both shared the first official photo from the ceremony.

The couple was also captured attending their rehearsal dinner at the Titanic Hotel the day before the nuptials.

Overflow of Blessings! God is so good!

The couple’s engagement was fairly short. Hmm, I wonder if their decision to abstain from sex until marriage had anything to do with the urgency to jump the broom? They announced their engagement in March, after beginning to date in April 2015. This is Ciara’s first marriage, while Russell is trying it again for a second time. He was previously married to his high school sweetheart from 2012 – 2014.

We wish the happy couple well. Let’s just hope Ciara’s baby daddy, Future, allows them to enjoy their honeymoon before enacting the murder plot Ciara says she afraid of.