GOSSIPONTHIS.COM Sports The City of Cleveland Lost Its F***ing Mind After Winning Their First... 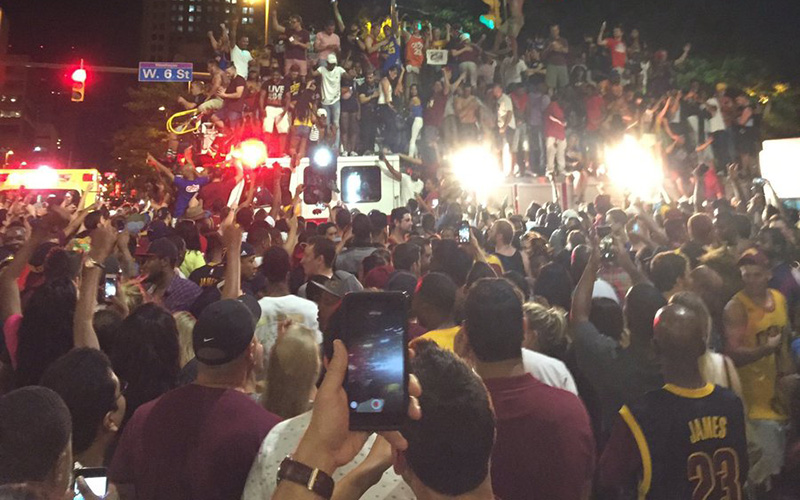 That’s over 50 years, people. FIVE decades. Do you know what has happened between 52 years ago and now? A LOT.

50 years ago, there was no Internet as we know it now. There were no social media trolls. Color TVs were considered a “luxury.” Cell phones did not exist. Hell, you probably didn’t exist 50 years ago.

So, do you know what the city of Cleveland did when their beloved Cavaliers defeated the Golden State Warriors to win the 2016 NBA Finals? Can you guess how Cleveland reacted when they realized that their 5-decade long drought of taking L after L after L after L in every single sport? CAN YOU IMAGINE?

Well, you don’t have to, thanks to Twitter. Based on a number of tweets from late Sunday night (Jun 19)/early Monday morning, the city of Cleveland lost their fucking minds, yo. LIKE. I MEAN, LIKE, SERIOUSLY.

They poured into the streets. They hijacked (or “borrowed“) and jumped on top of moving fire trucks and ambulances. They destroyed poor, defenseless police cars. They … completely lost their shit.

I've waited a LONG time for a scene like this. #ALLin216 #Cleveland pic.twitter.com/0jSw6yQ2MU

DISPELLING FALSE REPORTS OF STOLEN FIRE TRUCK. NO EMERGENCY VEHICLES HAVE BEEN STOLEN.

Cleveland police said there is no fire truck stolen…technically it's not stolen…just occupied currently… pic.twitter.com/OBeXcNjORB

See, the fire truck was not stolen. This, however, is not okay. ? pic.twitter.com/wqoK6idMYD

This is the craziest thing I’ve ever been a part of. Cleveland, Oh! pic.twitter.com/JsDmAOih90

e 4th the moment cleveland won our first championship in over 50 years, 19 years of being loyal finally paid off ?? pic.twitter.com/xFSX81W8rX

I love my Dad so much. His response to Cleveland winning ?? pic.twitter.com/jrNRLSCtmC

Here's my dad. I thanked him for making me a Cleveland fan. All worth it for tonight #cavs #nbafinals #allin216 pic.twitter.com/aiXfp0cr5i

everyone in cleveland gets a ring

If you have been riding for Cleveland all this time (and aren’t just hopping on the bandwagon, because LeBron) … then you deserve a ring too!