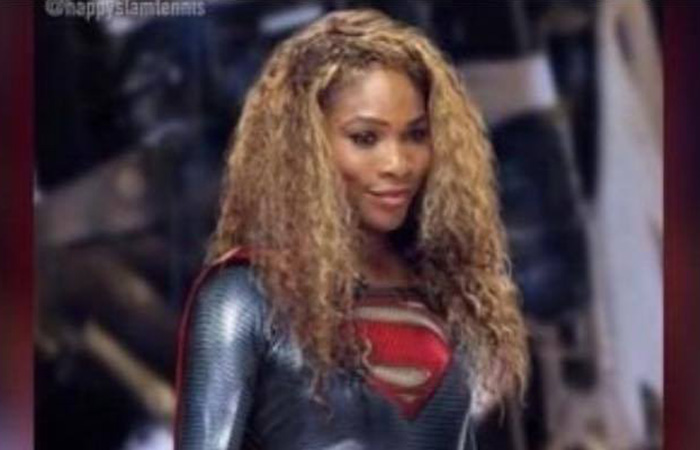 Note to all thieves: Never try to steal from Serena Williams. She will catch you, and when she does, prepare to be served.

Earlier this week, along with a photoshopped image of her dressed up as Superwoman, the pro tennis star posted a lengthy message on Facebook about a guy who tried her after he stole her cell phone while she was at dinner.

According to Serena, she was enjoying her food at a Chinese spot with a friend Tuesday night (Nov 3) when a random guy standing beside her grabbed her phone and ran out of the restaurant.

Serena says her “SUPERHERO sense” instantly kicked in, causing her to sprint out of the restaurant and chase the guy down.

In the end, the guy gave Serena her phone back and she received a standing ovation from everyone in the restaurant.

Moral of the story is … don’t f*ck with Serena Williams. She’s definitely about that life!

Soooooo yesterday at dinner the CRAZIEST THING happened to me. I was sitting enjoying some Chinese food (delicious may I add) and this guy stands next to me. It was only 2 of us sitting at a 4 person table just chatting like we have not seen each other in years. Anyways I digress, so this guy is standing next to me and something (I have now dubbed it my SUPERHERO sense) told me to watch him. My phone was sitting in the chair but I just didn’t feel right. He was there too long.

“Is he a customer?” I thought “Is he waiting on the bathroom?” nonetheless I tried to shake his this eerie feeling. However, I kept watching him from the corner of my eye. Than when least expected low and behold this common petty thief grabbed my phone and swiftly left. I looked at the chair, than shouted “Omg that dude took my phone!!” Not thinking I reacted (hence the superwoman photo) I jumped up, weaved my way in and out of the cozy restaurant (leaping over a chair or two) and chased him down.
He began to run but I was too fast. (Those sprints came in handy) I was upon him in a flash!

In the most menacing yet calm no nonsense voice I could muster I kindly asked him if he “accidentally” took the wrong phone. He stumbled on his words probably not expecting this to happen. While he was thinking of the right thing to say and eventually he said “Gosh you know what I did! It was so confusing in there. I must have grabbed the wrong phone.”

Meanwhile My phone was ringing, my superhero sidekick quailman was face timing me so he could not possibly deny the allegations. I swiftly thanked him and left.
Superhero? Maybe? Or HELL YEA!! I’ve got the speed the jumps, the power, the body, the seduction, the sex appeal, the strength, the leadership and yet the calm to weather the storm.

Always listen to your superhero inner voice. Always keep your things close! Fight for what’s right. Stand for what you believe in! Be a superhero!

When I got back into the restaurant I received a standing ovation. I was proud. I just showed every man in there I can stand up to bully’s and other men. It was a win for the ladies!

Just because you are a lady don’t be afraid to step up to any challenge and not be a victim but a hero!