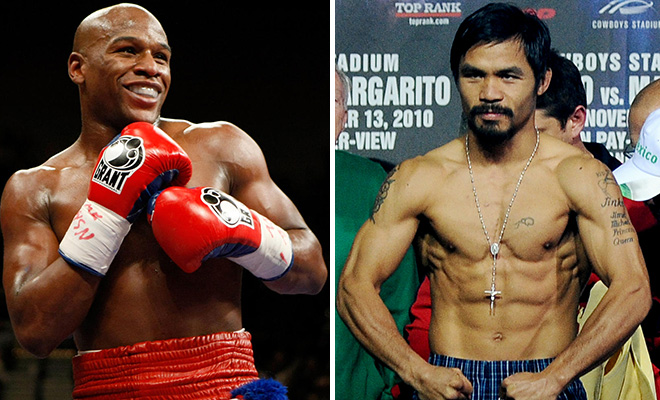 After going back and forth for years (YEARS!), Floyd Mayweather Jr. has finally called Manny Pacquiao out for a one-on-one boxing match.

Mayweather made the shade-filled announcement last night in an interview with Showtime. He wants his next fight to be against Pacquiao on May 2nd, the weekend of Cinco de Mayo, which Mayweather has regularly fought on.

“I would love to fight Manny Pacquiao. We tried to make the fight happen years ago; we had problems with random blood and urine testing,” Mayweather said in the interview in San Antonio, where his promo company TMT was putting on a boxing card.

“I just want to be on an even playing field. Now he’s in a very, very tight situation. He’s lost to [Juan Manuel] Marquez [in 2012], he’s lost to [Timothy] Bradley [by controversial decision in 2012 but avenged it in April]. Pay-per-view numbers are extremely low. He’s desperate. I wanted that fight a long time ago. I’m just waiting on them. We’re ready. Let’s make it happen. May 2. Mayweather versus Manny Pacquiao. Let’s do it.”

So at this point, is anyone even taking this serious?

Sports analyst Kevin Mitchell from The Guardian sure isn’t:

After so many aborted attempts in the past five years, cynics are entitled to believe Mayweather-Pacquiao at boxing HQ on Cinco de Mayo weekend will coincide with the reappearance of Jesus Christ and Elvis in a spaceship in the middle of the Las Vegas Strip, accompanied by Frank Sinatra singing My Way.

Five years ago I would have picked Pacquiao to win – maybe. Now? Mayweather. But, really, it no longer matters and, like most sensible fans, I don’t much care.