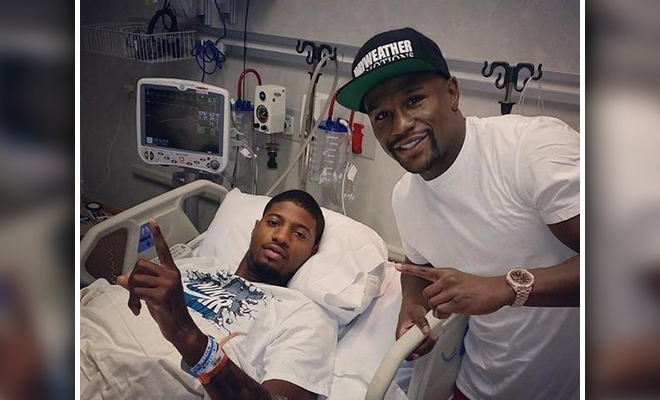 NBA player Paul George appeared to be in good sprits during a recent hospital visit from Floyd Mayweather Jr. after he suffered a horrific leg injury in a Team USA scrimmage game over the weekend in Las Vegas.

The Indiana Pacers small forward was attempting to block a layup from Houston Rockets shooting guard James Harden when his right foot slammed against the goal post and immediately snapped right above the ankle.

The injury was so bad that ESPN refused to show replays and Team USA’s head coach Mike Krzyzewski ended the game on the spot.

Here is an image of the gruesome injury right as it happened.

Paul tweeted after the game and was in positive spirits, but still … OUCH.

Hopefully the personal visit from Money Mayweather made things a little bit better.