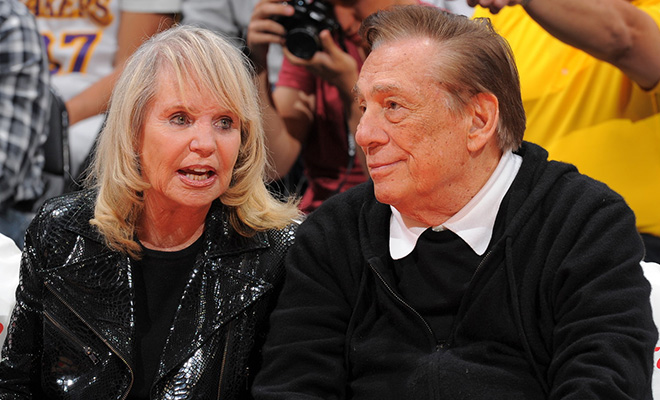 Donald Sterling, the racist (but not racist?) owner of the Los Angeles Clippers, has reportedly surrendered all of his control of the team to his estranged wife Shelly Sterling, and she is said to be “secretly” negotiating a sale of the team with the NBA, but “ON HER TERMS.”

As reported by TMZ Sports:

Sources close to the Clippers organization tell us … Donald made the decision because he saw the handwriting on the wall — as long as he remained in control, the NBA would order an involuntary sale of the team.

Our sources say Shelly and her lawyer, Pierce O’Donnell, have been secretly meeting with NBA Commissioner Adam Silver and NBA lawyers to “resolve the dispute amicably.”

We’re told Shelly realizes the NBA wants the team sold, but she has significantly more leverage and credibility with the league than Donald. Her end game is simple — she won’t object to the sale, but SHE wants to call the shots.

According to TMZ’s sources, Shelly is well-prepared to sue the NBA, and she plans to file legal docs (not from the suit, but papers describing her case) on Tuesday (May 27) if the NBA orders an involuntary sale of the team.

Shelly says she’s OK with selling the team, but only on her terms, and she wants to retain a minority interest in the Clippers.

There’s only one problem with that. The NBA is NOT having it!

Such a condition is not acceptable to the league, which wants to wash its hands of both Sterlings. The NBA said Friday that it will proceed with plans to forcibly terminate the Sterlings’ ownership with a three-quarters vote of league owners.

The latest move by the Sterlings appears to be an attempt to hang on to a share of the team in the face of imminent termination by the NBA.

By turning the team over to his wife to sell, Donald Sterling could force the league to fight his wife instead, even though his racist remarks are the reason the NBA is trying to force a sale.

By agreeing to sell on her terms, Shelly Sterling also is signaling to the NBA that the league can avoid a protracted fight with her if it lets her keep an ownership share.

Otherwise, she could fight a forced sale of the team in court or complicate the situation by filing for divorce, which could drag the case out by at least temporarily putting it under the jurisdiction of a California family law court.

On April 29th, just four days after Donald Sterling’s “female friend” (or girlfriend/sidepiece … whatever you want to call her) V. Stiviano leaked audio of him making racist remarks, NBA commissioner Adam Silver banned the 80-year-old from the league FOR LIFE, and also fined him $2.5 million.

On May 1st, the NBA Advisory Committee unanimously voted to move forward with the process of terminating the Sterling’s ownership of the team.

On May 6th, Clippers President Andy Roeser was placed on indefinite leave by the NBA for allegedly trying to help cover up the scandal, and within three days, the NBA had appointed former Time Warner CEO Dick Parsons as CEO.

On Monday (May 19), the NBA filed a former charge against Sterling, saying that he damaged the league and its teams with his racist comments, and he engaged in other conduct that hurt its relationship with fans and merchandising partners.

The next day at a press conference before the draft lottery, Adam Silver said he was open to the idea of the Sterlings selling the team without having the special hearing on June 3rd to terminate their ownership.

However, Silver is adamant about the team actually SELLING the team, WIHOUT retaining a minority share.

“I’ll only say that Mr. Sterling still owns the Los Angeles Clippers. Mrs. Sterling as I understand it through a trust owns 50% of the team, as well,” Silver said.

“It is their team to sell, and so he knows what the league’s point of view is, and so I’m sure if he wanted to sell the team on some reasonable timetable, I’d prefer he sell it than we go through this process. … I’m open to that.”

But NBA players want the whole family gone. “As players, we want what’s right and we don’t feel like no one in his family should be able to own the team,” Miami Heat star LeBron James said on May 11th.

After he heard the Sterlings were moving towards the idea of selling the Clippers, James said on Friday (May 23), “That’s the way it should be. … He shouldn’t be part of this league. We don’t want this to linger around our sport.”

He added, “It sucks that it happened, but the players and the owners and everyone associated with the game know there’s no need for it. The quicker it gets done, the sooner we can move on.”

The Los Angeles Clippers are owned by the Sterling Family Trust in the names of Donald and Shelly Sterling, who bout the team for around $12.5 million in 1981. The trust will be bequeathed to their children upon death.

But the bigger question is how much money will Donald and Shelly Sterling make from selling the Clippers?

With the team being valued by some reported estimates at over $1 billion … A HELLUVA LOT.

So regardless of whether or not Donald Sterling owns the Clippers, he’s still rich as f*ck. And racist.