GOSSIPONTHIS.COM Pop Culture “HURRY UP AND DRAFT ME!”: Johnny Manziel’s Desperate Text to the Cleveland... 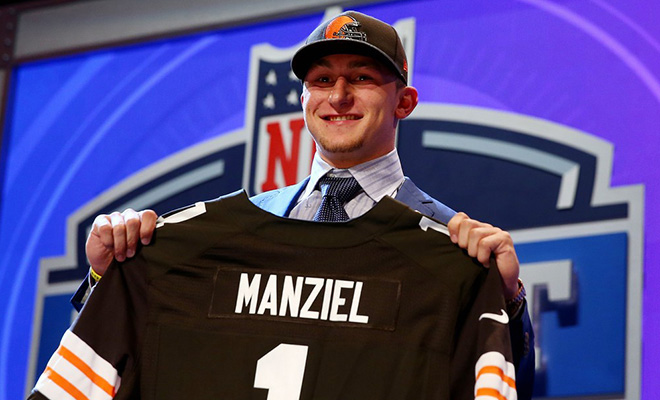 Desperate times call for desperate measures … which is probably exactly what now former Texas A&M quarterback Johnny Manziel was thinking when he sent out a text message desperately pleading for the Cleveland Browns to draft him.

Less than a week after Browns owner Jimmy Haslam reportedly said a homeless person told him to draft Manziel, Cleveland’s quarterback coach Dowell Loggains revealed in an interview that Drake’s BFF was frantically texting him on the opening night of the NFL draft literally BEGGING to be drafted:

“We’re sitting there and they keep showing Johnny on T.V. and Johnny and I are texting and he shoots me a text and he says, ‘I wish you guys would come get me. Hurry up and draft me because I want to be there. I want to wreck this league together.’

“When I got that text, I forwarded it to the owner and to the head coach (Mike Pettine),” Loggains said Thursday on Sports Talk with Bo Mattingly on Arkansas ESPN. “I’m like ‘this guy wants to be here. He wants to be part of it.’ As soon as that happened, Mr. Haslam said, ‘pull the trigger. We’re trading up to go get this guy.'”

Loggains also made it a point to note that Manziel was the top quarterback on the team’s draft board so it wouldn’t seem like his eleventh-hour text was what got him on the team.

“It was Manziel and then everybody else,” Loggains said.