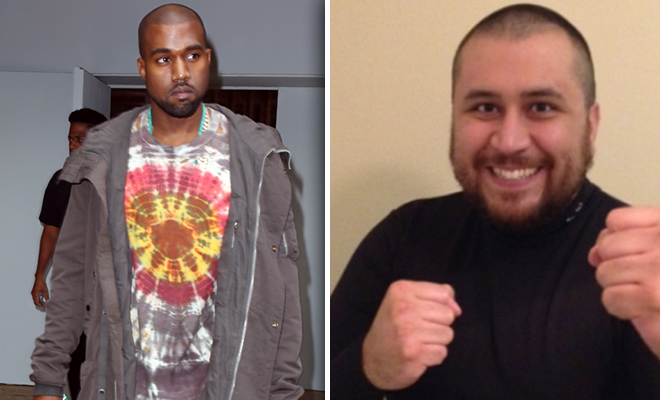 George Zimmerman really needs to sit his azz down!

But the most ironic part of all is … George wants to fight Kanye for attacking “defenseless people.”

Seriously?!?! This guy is literally the last person in the world to be talking about harming people who can’t defend themselves. GTFOH!!

We’re told George’s beef with Kanye is not just that he attacks paparazzi  … but the innocents as well — like the 18-year-old who allegedly called Kim an “N***** lover.”

The promoters say if Kanye takes Zimmerman up on the offer … they’re willing to move the fight to L.A.

If Kanye does decide to take him up on his offer (which we highly doubt), we hope he beats the living sh*t out of Zimmerman, and we would pay top dollar just to see him do it!

Zimmerman made headlines last month after TMZ reported that he was teaming up with celebrity boxing promoter Damon Feldman after challenging “ANYONE … even black people” to fight him in a boxing match.

George has been more into boxing than guns lately, and has reportedly been “regularly training in the ring.” His opponent hasn’t been selected yet, but George has gone on record to say that he is open to fighting a black person, but his promoter isn’t discriminating.

Feldman told TMZ, “We’re not looking at it as a race thing … We haven’t discussed purple, yellow, white, black.”

The money from the fight would be donated to charity, and if you’re interested in signing up to beat the living sh*t out of George Zimmerman in the March 1st match, you can e-mail fightgeorge@hotmail.com, because, wow. He’s really serious about that, huh?

So far, The Game and DMX have both publicly responded to Zimmerman’s challenge, as well as 4,700 others who want a piece of one of the most hated guys in America.

Game, who is 6’5″ and 240 pounds, expects to quickly knock Zimmerman out, while DMX’s attack on Zimmerman would be a bit more brutal:

DMX says he’ll be jailed if promoters allow him to step in a boxing ring with George Zimmerman … because he’d break every boxing rule in the book — then piss on his face.

The 43-year old rapper tells TMZ … he’s throwing his name out as a potential opponent for George’s upcoming celebrity boxing gig — just like The Game — and says he wants to do it for “every black person who has been done wrong in the system.”

DMX adds, “I am going to beat the living f**k out him … I am breaking every rule in boxing to make sure I f**k him right up.”

He adds, “Zimmerman is a piece of s**t and that’s what he needs to drink.”

While we hear ol’ Georgie has agreed to take up Game on his offer, we’re willing to bet he won’t take up DMX’s. Who wants to get pissed on by DMX? Eww.

Meanwhile, George Zimmerman’s team has reportedly beefed up his security because they’re afraid for his friggin’ life.

According to TMZ, the upcoming boxing match will be hold in a secret location “FILLED with security” in an effort to protect George from “vengeful foes.”

We’re told there will only be 100 people present. Some will be “celebrities” and reporters. The promoter is worried if the venue becomes public … someone will do to George what he did to Trayvon.

Fortunately for those us who won’t be a part of the 100 people present, the event will be streamed online … but through a paid subscription, though we’re willing to bet someone will get something up on Ustream, or at the very least, YouTube after it’s all said and done.

WE HAVE TO SEE THIS.