He’s never been considered the best soccer player in the world, but it’s safe to say that David Beckham has most certainly become the most recognizable player in the sport known as “football” in every part of the world except the U.S. and Canada. And now, following an illustrious 20-year career, David Beckham is retiring.

The 38-year-old Paris Saint-Germain midfielder announced early Thursday (May 16) that he would be hanging up his soccer cleats for good after this season ends. He said in an official statement:

“I feel now is the right time to finish my career, playing at the highest level.

“I want to thank all my team-mates, the great managers that I had the pleasure of learning from. I also want to thank the fans who have all supported me and given me the strength to succeed.

“If you had told me as a young boy I would have played for and won trophies with my boyhood club Manchester United, proudly captained and played for my country over 100 times and lined up for some of the biggest clubs in the world, I would have told you it was a fantasy.

“I’m fortunate to have realized those dreams.”

Though he was never able to win the soccer equivalent of the Super Bowl, known as the World Cup, Beckham did win 10 league titles in his 20 seasons, which helped him cement his status in the game.

Beckham, who once played with the Los Angeles Galaxy of Major League Soccer, is also credited for helping make the sport popular in the United States. He is described by FIFA President Sepp Blatter as “one of the most iconic figures in global football.”

Shortly after the news broke announcing his retirement, Beckham updated his Facebook page with a full statement that includes the paragraphs quoted above, as well as the following:

“To this day, one of my proudest achievements is captaining my country. I knew every time I wore the Three Lions shirt, I was not only following in a long line of great players, I was also representing every fan that cared passionately about their country. I’m honoured to represent England both on and off the pitch.

“I wouldn’t have achieved what I have done today without my family. I’m grateful for my parents’ sacrifice, which made me realise my dreams. I owe everything to Victoria and the kids, who have given me the inspiration and support to play at the highest level for such a long period. I also want to thank Simon Fuller and his team for their continued support.

“I want to thank all my team-mates, the great managers that I had the pleasure of learning from. I also want to thank the fans who have all supported me and given me the strength to succeed.

“Nothing will ever completely replace playing the game I love, however I feel like I’m starting a new adventure and I’m genuinely excited about what lies ahead. I’m fortunate to have been given many opportunities throughout my career and now I feel it’s my time to give back.”

Beckham’s last game will be on May 26th.

WATCH HIM DISCUSS HIS RETIREMENT IN AN INTERVIEW HERE: 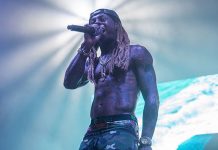 Did Lil Wayne Really Announce His Retirement From Rap on Twitter?