Chris Paul is headed to Los Angeles! But unfortunately, not to the Los Angeles basketball team everyone was hoping for.

The NBA announced today that the New Orleans Hornets have traded Chris Paul to the Los Angeles Clippers in a deal that will give them guard Eric Gordon, forward Al-Farouq Aminu, center Chris Kaman and a first-round draft choice.

Unlike the proposed Lakers deal, this new one with the Clippers was approved by NBA Commissioner David Stern, who, according to AP, must approve all deals regarding teams owned by the league.

According to USA Today, Chris Paul will make $16.3 million this season alone while becoming the franchises most significant free agent acquisition since relocating to Los Angeles back in 1984.

Paul is also expected to sign an extension with the Clippers, who would own his “Bird rights.”

Under the new collective bargaining agreement, Paul can sign a five-year extension with the Clippers for $100.2 million, USA Today reported.

What do you think about the Chris Paul trade? 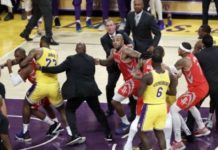