GOSSIPONTHIS.COM Pop Culture Dennis Rodman to be Inducted into the Basketball Hall of Fame
ShareTweet It’s been confirmed people. Dennis Rodman, the greatest re-bounder in NBA history and one of the league’s best defenders for a decade, will enter the Naismith Basketball Hall of Fame.

The Hall, which recognizes players, coaches and executives for their contributions to collegiate, professional and international basketball, announced its 2011 class on Monday (Apr 4) during the Final Four in Houston.

Rodman, who spent 14 seasons in the NBA, won five NBA championships, two with the Pistons and three with the Chicago Bulls after Michael Jordan’s first retirement and comeback.

Dennis was also an incredible re-bounder — the best ever — and a great post defender. Rodman won seven rebounding titles — notable during the era of Charles Barkley, Patrick Ewing, Hakeem Olajuwon and David Robinson — and currently has the No. 1 total rebounding percentage of all-time. 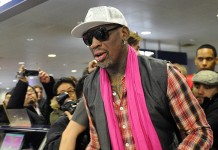