Basketball player Paul Pierce got hitched over the weekend, just one week after extending his contract for four more years with the Boston Celtics.

The NBA star married his fiancee, interior designer Julie Landrum, in an oceanfront ceremony Saturday (Jul 17) on the coast of California in a very small wedding that included less than 100 guests. The couple’s 2-year-old daughter Prianna was the flower girl.

Pierce, 32, and his 27-year-old bride exchanged vows underneath a gazebo at The Resort at Pelican Hill in Newport Coast, California and after the ceremony, guests, which included Pierce’s teammates Kevin Garnett and Ray Allen, along with their coach Doc Rivers, headed to an indoor reception where the newlyweds shared their first dance to R. Kelly‘s “You Made Me Love You.”

Congrats to Paul and his new wife! 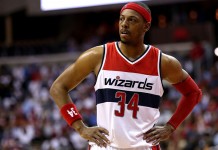