According to a popular Inquirer Sports Columnist, basketball player Allen Iverson “needs more than a prayer.” Citing his alcohol problems and issues with gambling, sports writer and TV personality Stephen A. Smith gave a pretty detailed account on what’s really going on in AI’s troubled life:

Allen Iverson is in trouble, folks, deep trouble. The combination of alcohol and gambling – and a once-promising career in tatters because of the first two – won’t culminate in anything short of disaster if help does not arrive in short order. If numerous NBA sources are telling the truth – and there’s no reason to believe they’d do otherwise in a situation of this magnitude – Iverson will either drink himself into oblivion or gamble his life away. Moore, ever the protector, would never admit as much, of course. But that’s part of the problem, isn’t it?

Iverson’s wife, Tawanna, having hired some high-powered Atlanta attorney and filed for a divorce last week, does not help matters. Nor does it help that she’s already separated from her husband, with custody of their five kids and seeking both alimony and child support. When you consider Iverson’s well-known penchant for alcohol and his banishment from casinos in Detroit and Atlantic City, if disgust and sadness don’t come to mind, at least one question does: Where is Pat Croce when you need him? Or Iverson’s coach at Georgetown, John Thompson?

Damn AI! You gotta get your sh*t together man… 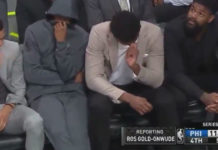 WATCH: 76ers Players Lose It After Someone Farts on the Bench 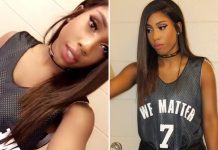