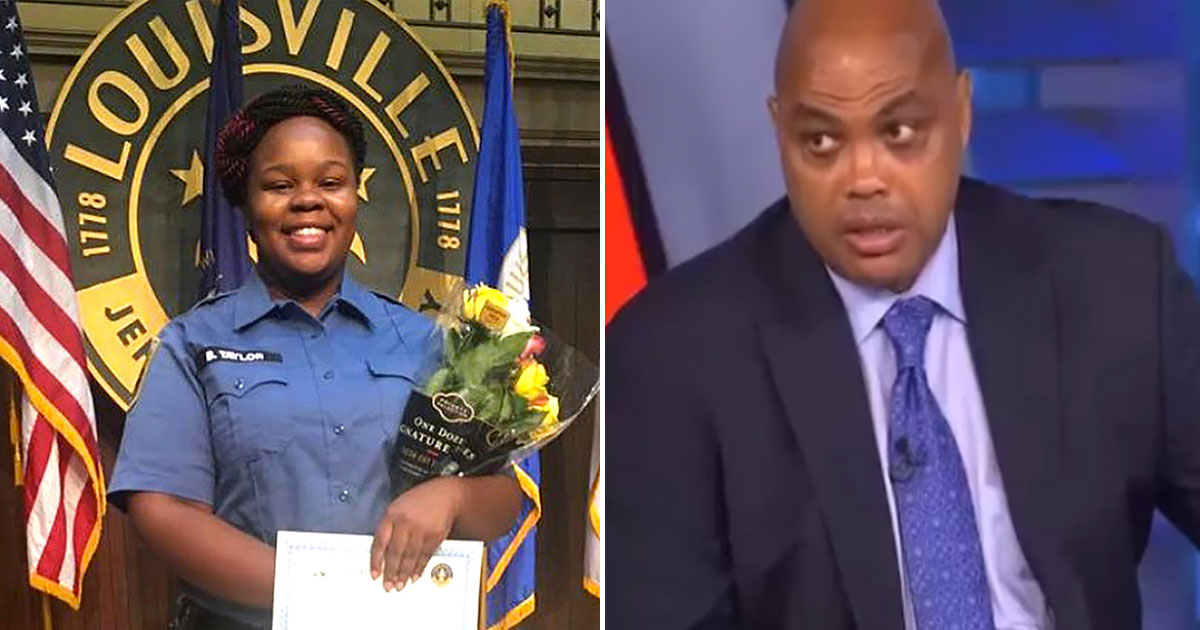 Charles Barkley drew ire on social media after he made some eyebrow-raising comments on television about Breonna Taylor, saying that her murder at the hands of police during a botched raid was different than the killings of George Floyd or Ahmaud Arbery and speaking out in defense of the cops who killed her.

On Wednesday (Sep. 23), it was announced by a grand jury that none of the three Louisville Metro Police Department officers would be charged in connection with Taylor’s killing.

Instead, fired cop Brett Hankison was charged with three counts of “wanton endangerment” because the shots he fired passed through Taylor’s apartment walls into a neighboring apartment endangering the lives of three people inside.

“It’s bad the young lady lost her life, but we do have to take into account that her boyfriend did shoot at the cops and shot a cop,” Barkley said Thursday night on TNT’s 2020 NBA Playoffs Tip-Off show in reference to Taylor’s boyfriend, Kenneth Walker, firing a warning shot after being awoken to what he thought was intruders breaking into their home.

“So, like I said,” he continued, “even though I’m really sorry she lost her life, I don’t think that we can just put this in the same situation as George Floyd and Ahmaud Arbery. I just don’t believe that.”

Charles Barkley says you can't put the Breonna Taylor case in the same situation as George Floyd, Ahmaud Arbery because her boyfriend shot at the police pic.twitter.com/8dMjVMZp39

Barkley’s co-host Shaquille O’Neal—who is an honorary deputy city marshal in Georgia and a reserve officer in California, Arizona and Florida—agreed with Barkley’s comments.

“I have to agree with Charles, this one is sort of lumped in,” Shaq said. “You have to get a warrant signed and some states do allow no-knock warrants. And everyone was asking for murder charges.

“When you talk about murder, you have to show intent. A homicide occurred and we’re sorry a homicide occurred. When you have a warrant signed by the judge, you are doing your job, and I would imagine that you would fire back.”

Barkley also said that he’s not a fan of the Black Lives Matter movement calling for the defunding of police departments, arguing that pulling cops off the streets would hurt lower-income black communities the most.

“So, that notion, they keep saying that,” Barkley continued. “I’m like, wait a minute, who are black people supposed to call? Ghostbusters?”

“We need police reform,” he reiterated. “But like I say, white people, especially rich white people, they’re always going to have cops. So we need to stop that ‘defund’ or ‘abolish the cops’ crap.”

"We need to stop the defund or abolish the police crap."

Charles Barkley has said some crazy stuff in the past (Remember what he said about Eric Garner?), so folks weren’t surprised about his comments about Breonna Taylor, yet that didn’t stop them from voicing their opinions on Twitter:

Charles Barkley is going to make me throw something at my TV.

Charles Barkley tonight on inside the NBa pic.twitter.com/Jmc6bdmIX4

I didn’t know I could be this disgusted by Charles Barkley.

i know Charles Barkley did NOT just say on national television — “i’m sad Breonna Taylor lost her life, but we can’t forget her boyfriend did fire at a cop first.”

please tell me i heard that wrong incorrectly …

Charles Barkley said we can’t put Breonna Taylor’s case in same breath as George Floyd and Ahmaud Arbery because we have to account for Breonna’s boyfriend shooting at the officer. pic.twitter.com/H4osAVKlKD

I watch Inside the NBA specifically to hear well-informed takes about cops from Charles Barkley (Republican), Ernie Johnson (2016 John Kasich voter), and Shaq (literally a cop)

Charles Barkley not having any sympathy for a black woman getting murdered by the police. I am not surprised. pic.twitter.com/XdW8sZ9lY8

Can Somebody Let Charles Barkley Know Her Boyfriend Shot @ A Cop Not Her!!! So If Somebody Shooting @ Kenny Smith & Shoot Him We Should Just Charge It 2 The Game??? (Meaning Act Like It Never Happen)….

Imagine in 1995 if you knew 25 years later that Donald Trump was president and you’d get your news from Charles Barkley… https://t.co/9m3Uu2FpjE

What planet does Charles Barkley live on?

TERRY CREWS: I refuse to be out cooned

I just saw why Charles Barkley was trending and the amount of coonery I just saw is,,,,mannnnnn ????? pic.twitter.com/mjD6aIyQhO