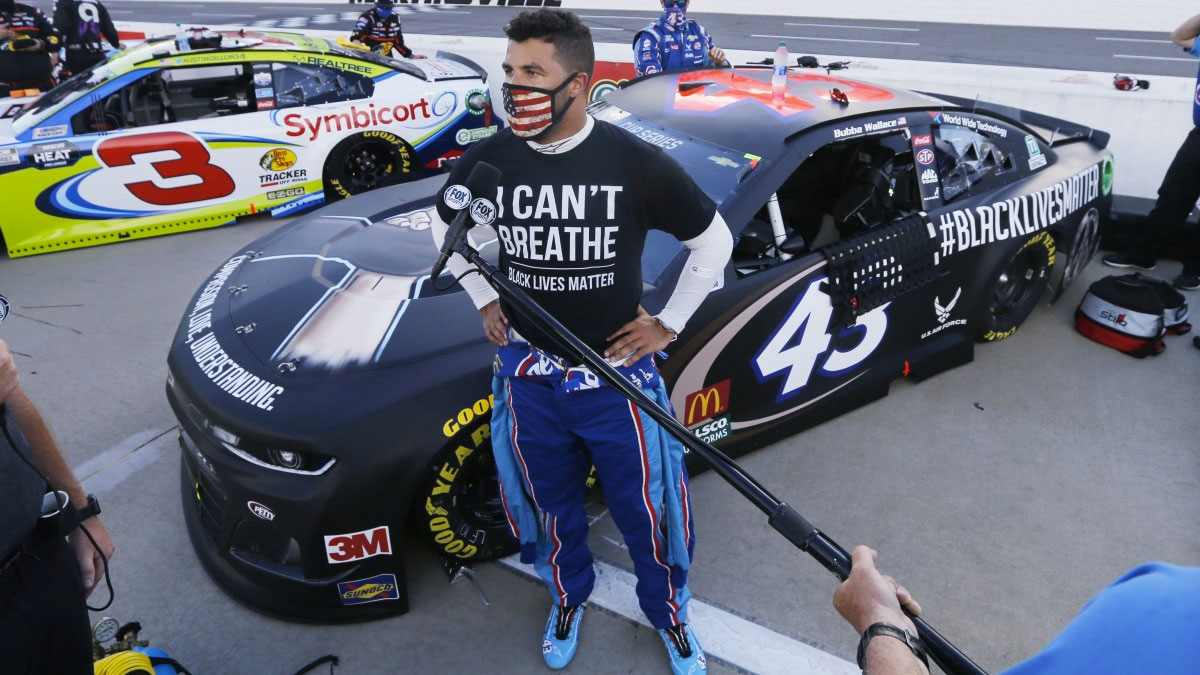 NASCAR has announced that they are launching an investigation after a noose was found inside the garage stall of Black driver Bubba Wallace at the Talladega Superspeedway in Lincoln, Alabama Sunday (Jun. 21).

NASCAR said in a statement:

“Late this afternoon, NASCAR was made aware that a noose was found in the garage stall of the 43 team. We are angry and outraged, and cannot state strongly enough how seriously we take this heinous act.

“We have launched an immediate investigation, and will do everything we can to identify the person(s) responsible and eliminate them from the sport.

“As we have stated unequivocally, there is no place for racism in NASCAR, and this act only strengthens our resolve to make the sport open and welcoming to all.”

Bubba Wallace just so happens to be the circuit’s one and only full-time Black driver who has been very vocal about his feelings regarding NASCAR’s race problems … and he took to social media denouncing what he called a “despicable act.”

“Today’s despicable act of racism and hatred leaves me incredibly saddened and serves as a painful reminder of how much further we have to go as a society and how persistent we must be in the fight against racism,” Wallace wrote on Twitter.

“Over the last several weeks, I have been overwhelmed by the support from people across the NASCAR industry, including other drivers and team members in the garage. Together, our sport has made a commitment to driving real change and championing a community that is accepting and welcoming of everyone.

“Nothing is more important and we will not be deterred by the reprehensible actions of those who seek to spread hate. As my mother told me today, ‘they are just trying to scare you.’ This will not break me, I will not give in nor will I back down. I will continue to proudly stand for what I believe in.”

As for the racist POS who did it … Nascar probably won’t have to look very far, as Deadspin reports that the noose was located “in a secure area where access is only made available to race team members, NASCAR officials, track workers, as well as, security, medical and safety personnel, according to a source. Garage stalls are off limits to the public.”

Their source added: “We’re not working under any assumptions just yet.”

The source said NASCAR is also reviewing security footage from cameras that are stationed throughout the garage, though the source noted that cameras aren’t placed in every stall … which is very ‘convenient,’ to say the last.

The insider also said that NASCAR is working with police because the placing of a noose would be likely considered to be a hate crime in Alabama.

ESPN reporter Marty Smith said that NASCAR says that if the perpetrator turns out to be a member of a race team, they are fully prepared to ban them from the sport for life.

Smith also reported that it was a member of Wallace’s team who found the noose and informed NASCAR of the heinous act before Wallace was made aware of it and saw it for himself.

NASCAR made headlines last week when it announced that they were banning spectators from carrying and displaying the Confederate flag at racing events from now on, something that Wallace called for in an interview with CNN.

Wallace also made his own headlines after he painted “Black Lives Matter” on the side of his No. 43 car.

NASCAR fans protested the ban by driving trucks with huge Confederate flags past the Talladega Speedway prior to Sunday’s (Jun. 21) Geico 500 race. Someone also flew a plane over the track with a massive flag along with the words “DEFUND NASCAR.”

The race, which was postponed to 3 p.m. Monday (Jun. 22) due to inclement weather, is the first amid the COVID-19 pandemic in which NASCAR opened the gates for up to 5,000 fans.