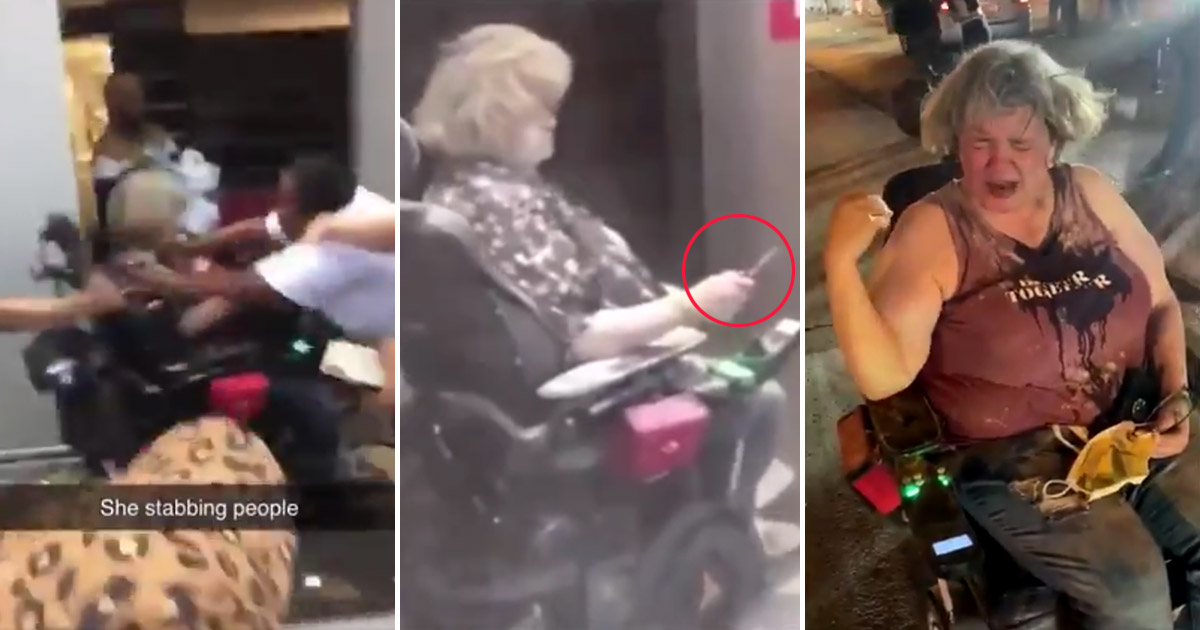 A knife-wielding vigilante in a wheelchair trying to save a Minneapolis Target from looters amid protests over the death of George Floyd was attacked after she was seen on video “stabbing people”—particularly Black people, according to eyewitnesses and social media reports.

Protests erupted in Minneapolis Tuesday and Wednesday after citizen video surfaced of now-former Minnesota police officer Derek Chauvin pinning Floyd down with his knee pressed against his neck while the man was in custody.

Floyd, a 46-year-old unarmed black man, could be heard in the video from Monday (May 25) begging for his life and telling Minneapolis he was having trouble breathing before he went unconscious and was later pronounced dead after being transported to the hospital.

Police were responding to a suspected “forgery in progress” after a man matching Floyd’s description allegedly used a counterfeit $10 bill.

Chauvin and his partner Tou Thao (who was seen in the footage idly standing by as Floyd was being suffocated), along with two other responding officers involved in the arrest—later identified as Thomas Lane and J. Alexander Kueng—were fired as a result of the fatal incident.

After the firings were announced, Minneapolis Mayor Jacob Frey called for the “arresting officer,” Chauvin, to be arrested and criminally charged. The FBI and Minnesota state authorities have also joined the investigation into Floyd’s death.

Multiple videos shared on social media Wednesday evening showed people looting at a Target store in Minneapolis amid the protests over Floyd’s killing.

Some videos showed the inside of the store, revealing overturned trash cans and shopping carts, as well as empty shelves. Other videos showed looters fleeing the store with flat-screen TVs and other expensive items.

The inside of the Target is smoky; people are trying to break into the cash registers. Alarm is blaring pic.twitter.com/qfd97sfNTr

Target is getting cleaned out pic.twitter.com/0OGSHY132k

#Minneapolis This Target got raided pic.twitter.com/FMkNiDIbYy

Another set of videos from the chaotic scene showcased the aftermath of an incident in which a White woman in a wheelchair had been stabbing the looters—particularly Black looters, eyewitnesses said—in an effort to get them to stop ransacking the store.

“She stabbing people,” read the caption of a video taken from Snapchat and later posted on Twitter.

At the Target in Minneapolis that was being looted tonight during the BLM riot, a woman in a wheelchair was attacked. pic.twitter.com/JxsXTB30xI

While none of the videos show the woman in the wheelchair actually stabbing people, one clip does appear to show someone yanking what looks like a sharp object out of her hand as she’s blocking the backdoor of the Target.

A woman then comes behind the wheelchair lady—who some called “Jennifer”—and hits her repeatedly in the back of the head.

In one of the clips, a voice can be heard saying: “Jennifer, is that enough?”

Later, when someone spotted the woman in the middle of the street, they advised her to leave the area for her own safety, but she refused, saying that she was “trying to block traffic so they don’t go down that way,” referring to the looters.

Another video posted later in the evening showed “Jennifer” appearing to walk just fine without her electric wheelchair.

The suspected white supremacist female in Minneapolis who was stabbing people, was NOT an innocent bystander.

And her lying ass ain’t even disabled. Here is video of her walking pic.twitter.com/u3rOCpAgDI

The looted Target store is located on Lake Street near a Minneapolis Police Department precinct, according to the Minneapolis Star Tribune.

A Target spokesperson released the following statement to the media Wednesday regarding the looting at that location: