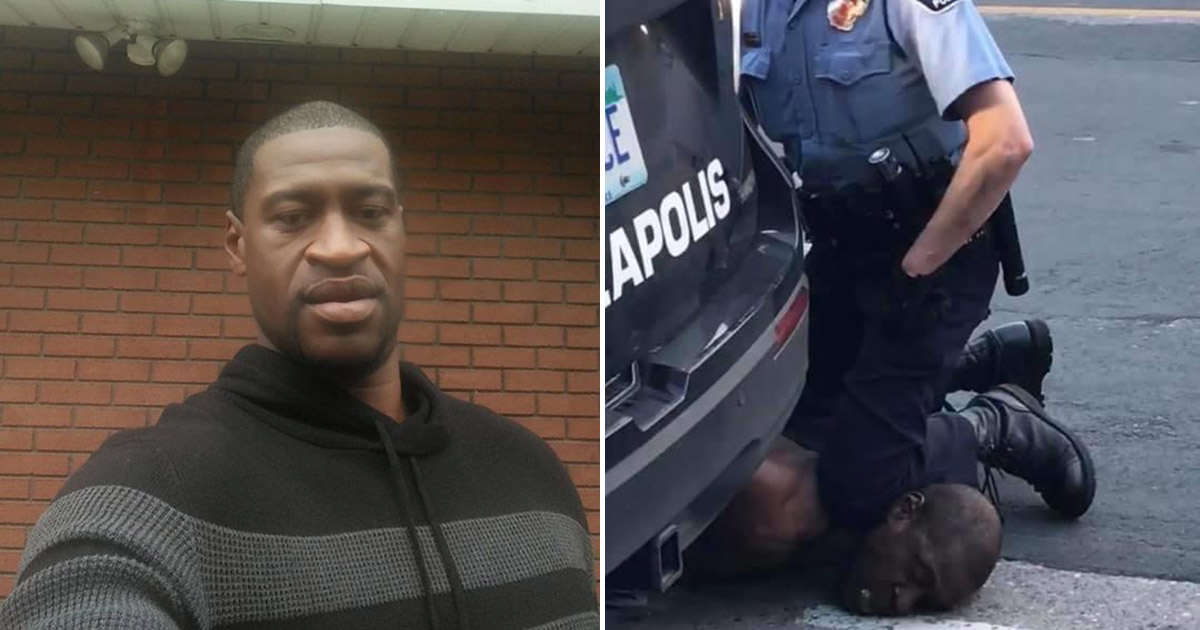 The Black Minnesota man who died after he was seen on video begging for his life as a White police officer kneeled on the back of his neck for several minutes has been identified as George Floyd.

Attorney Benjamin Crump—who has represented the families of several victims in civil rights cases (Trayvon Martin, Michael Brown, etc.)—said that he will be representing Floyd’s family as well.

We have been informed that the man killed by Minneapolis police was named George Floyd. #JusticeForFloyd #icantbreathe pic.twitter.com/76e3UA9JAK

Crump said in a statement: “We all watched the horrific death of George Floyd on video as witnesses begged the police officer to take him into the police car and get off his neck. This abusive, excessive and inhumane use of force cost the life of a man who was being detained by the police for questioning about a non-violent charge.

“We will seek justice for the family of George Floyd, as we demand answers from the Minneapolis Police Department. How many ‘while black’ deaths will it take until the racial profiling and undervaluing of black lives by police finally ends?”

The incident happened on Memorial Day—Monday (May 25)—and was captured on video by a bystander while police were responding to a “forgery in progress.”

Police said they arrived to find Floyd sitting on top of a car and he appeared to be under the influence. When the man stepped away from the vehicle, police said he resisted officers, who then handcuffed him.

While apprehending Floyd, one officer continued holding him down by putting his knee on the back of the man’s neck.

The video goes on for several minutes while bystanders beg the officers to let the man up.

“He’s not even resisting arrest right now, bro,” one bystander can be heard telling the officer and his partner. “You’re f**king stopping his breathing right now, you think that’s cool?”

Bystanders then point out that the man’s nose was bleeding and then he eventually loses consciousness, however, the officer continues pinning the man down with his knee until an ambulance arrives.

Floyd was then transported to Hennepin County Medical Center where he was pronounced dead “a short time later,” police said in a statement.

Darnella Frazier, the bystander who recorded the video, said she was walking to the shops when she saw the man being restrained by officers.

She said he was crying and complaining about how he couldn’t breathe, so she pulled out her phone and started filming.

“A lady that claimed to be a firefighter demanded for them to check his pulse and they completely ignored her and was very rude to her,” Frazier said.

“Eventually he stopped talking and went silent. That’s when he looked dead. It looked as if he was running out of energy and time, and eventually slowly was dying. I’ve seen police be aggressive but never kill someone in front of me.”

Minneapolis Mayor Jacob Frey said he watched the entire video and called it “wrong on every level.”

My remarks delivered earlier this morning and video below. https://t.co/qC2IgWdm1T pic.twitter.com/XWXhSygaCY

“For the better part of the night I’ve been trying to find the words to describe what happened. And all I keep coming back to is that he should not have died. What we saw was horrible, completely and utterly messed up. This man’s life matters. He matters. He was someone’s son,” Frey said.

“I believe what I saw and what I saw was wrong at every level. This does not reflect the values that Chief Arradondo has worked tirelessly to instill. It does not represent the training we’ve invested in or the measures we’ve taken to ensure accountability. Being black in America should not be a death sentence.”

Frey added: “For five minutes, we watched as a white officer pressed his knee into the neck of a black man. For five minutes. When you hear someone calling for help, you are supposed to help. This officer failed in the most basic human sense.

“What happened on Chicago and 38th last night is awful. It was traumatic. It serves as a reminder of how far we have to go. Whatever the investigation reveals, it does not change the simple truth, he should still be with us this morning.”

Minnesota Governor Tim Walz wrote on Twitter: “The lack of humanity in this disturbing video is sickening. We will get answers and seek justice.”

Both of the officers have been “relieved of duty status” with pay, officials said.

Meanwhile, the FBI has said they will launch an investigation into the incident for possible civil rights violations, and the Minnesota Bureau of Criminal Apprehension is also involved.

Minneapolis activist Nekima Levy-Armstrong told the Star Tribune that the incident is all too familiar.

“It just reminds me of Eric Garner once again: a black man being accosted by police and pleading for his life saying he couldn’t breathe,” Levy-Armstrong said. “I’m fully convinced that if police wouldn’t have been called to the scene, then he would still be alive.”

She added: “Whatever the man may have done should not have ended in a death sentence. What started as an alleged economic incident once again turned deadly for a black man.”