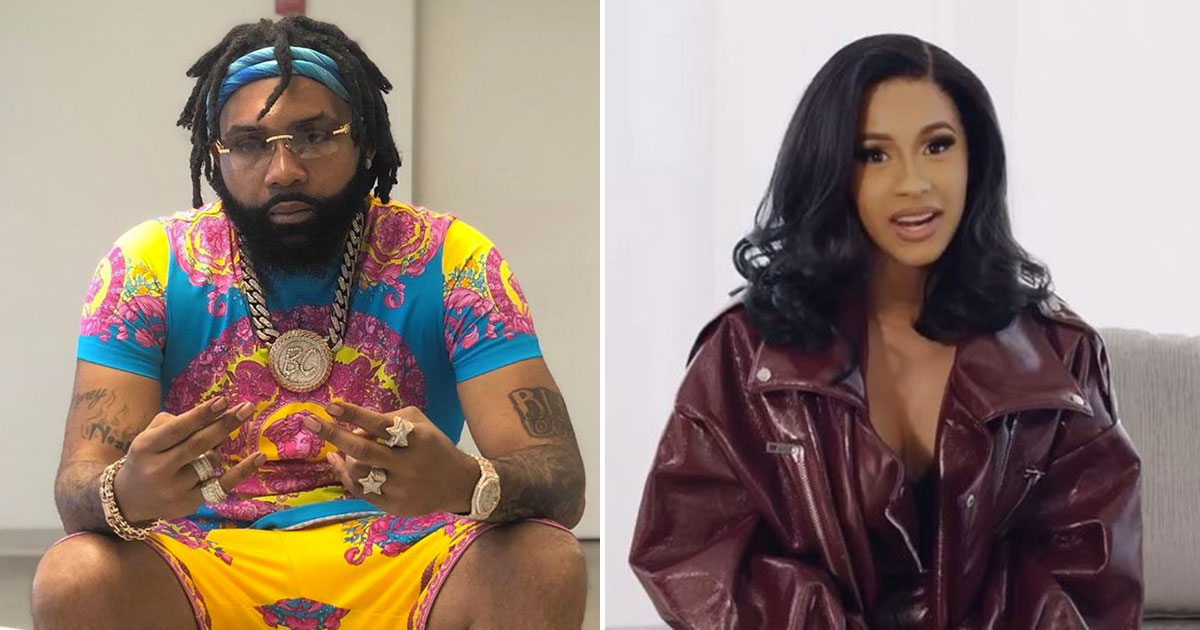 Atlanta rapper Money Man says he would have never been a victim of “#SurvivingCardiB” … because if she had tried to drug and rob him, he would have put a bullet “right in her face.”

Cardi B caught a lot of flack back in March after old videos resurfaced in which she bragged about drugging and robbing men back in her stripper days, and it sparked a huge debate about double standards and inspired a whole “#SurvivingCardiB” hashtag that took over Twitter for days.

Money Man just put out a new song called “ATM,” and he briefly touches on the issue, saying that he would have shot Cardi B “right in her face” if she tried to drug and/or rape him in a hotel room.

He seems to be pretty serious about it too … because it is literally the FIRST line of the song and it also serves as the hook. 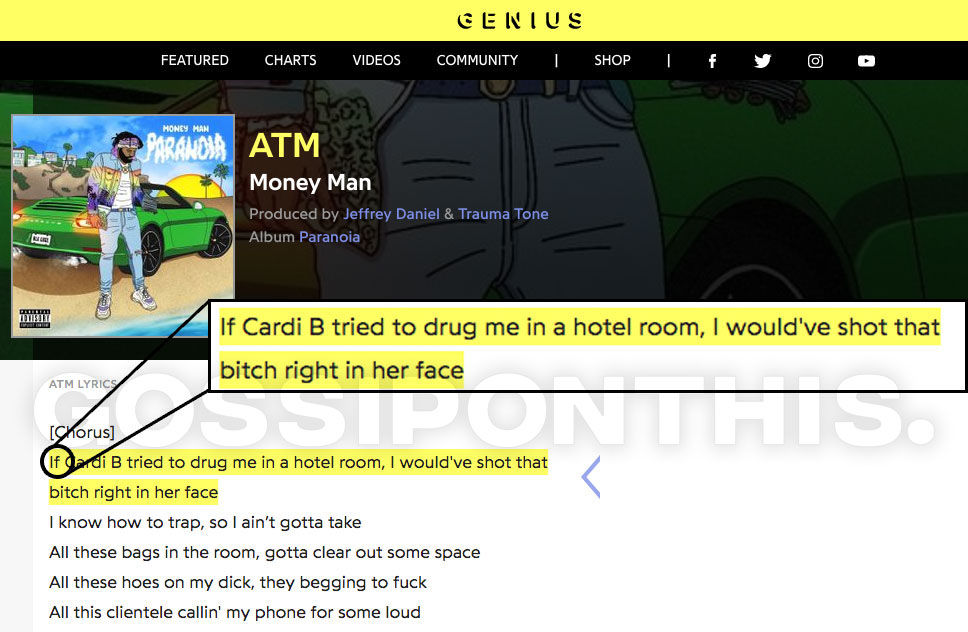 We know it’s just a song lyric, but DAYUM! Shooting her in the face?! Whew chile, the violence!

Take a listen for yourself below:

Now, you might think we’re bugging in pointing this out … but Twitter has been talking about it all week, so it’s not just us who think bruh is straight up wilin’ with that Cardi B line.

Money Man really said “if Cardi B tried to drug me in the hotel I woulda shot that bih right in her face” ????? yo

If Cardi B tried to drug me in a hotel room , I would’ve shot that bitch right in her face -money man

If Cardi B Tried To Drug Me In A Hotel Room, I Would’ve Shot That B*tch Right In Her Face!! -Money Man

If Cardi B tried to drug me in a hotel room, I would've shot that bitch right in her face. —Money Man.
Couldn’t agree more!

I fuck with money man but he could suck my dick with that ATM track ? @iamcardib FOREVA

If Cardi B tried to drug me in the hotel room I woulda shot that bitch right in her face .. Money Man too real for that line ?

Money man said “If Cardi B tried to drug me in a hotel room I would've shot that bitch right in her face” ?????

That boi money man say” If Cardi B tried to drug me a hotel I would’ve shot that bxtch right her face” ?? he want smoke lol

“ATM” appears on Money Man’s new album Paranoia, which was just released two weeks ago on May 24th.

Aside from the graphic threats of violence against Cardi B … Money Man appears to be a pretty solid dude with a good head on his shoulders, especially when it comes to his, “money moves,” in the words of Cardi B (ironically).

According to Kulture Hub, the 32-year-old owns a marijuana farm, has made hundreds of thousands of dollars investing in cryptocurrency, and owns a label imprint, all while being fairly new to hip-hop.

The Atlanta rapper first made a splash on the mixtape circuit back in 2016 with his Black Circle series, with his most notable song being “How It Feel,” yet Money Man moves like someone who’s a 10-year vet in the industry.

After catching his buzz, Money Man signed with Cash Money Records in 2017 but eventually found it not conducive to how he wanted to go about his career. So the then-new rapper with a shiny new record deal, put up $250,000 to get out of that contract.

Money Man said Cash Money’s decision to remove his music from all streaming platforms was the “one of the final nails in the coffin” when it came to parting ways with the label.

“I just left because my [signing] wasn’t helping me. It wasn’t bettering my situation. Whatever I felt like they could do at the time, I could do myself.

“When they took my music down from streaming platforms, that was one of the final nails in the coffin because I was like ‘I gotta go ahead and get myself out of this situation before it messes up my income.’ So I went ahead and rectified them and got everything back up and running.

“But I was already planning on leaving, about four, five months in. I just felt like being independent at the time because it was like, I might as well. I was already winning independently. But now, if they come with a lot of money we can work something out. As long as the paperwork look good. A lot of people worry about that later.”

In an August 2018 interview with Pitchfork, Money Man—who releases music exclusively via digital distribution services like Tunecore and YouTube—said he enjoys the flexibility of being an indie artist vs. being signed to a major record label.

“If I record the song right now, I can drop it on YouTube right now, and I’m going to get paid for it,” he said. “I got an in-house mixer. If he takes too long, I just put it out rough, so people can feel the realness of the song.”

Money Man says rap is far from an endpoint for him, and he’s just getting started with his dream of one day becoming a billionaire like Jay-Z.

“I look at rap as a doorway to becoming a billionaire,” he told Pitchfork. “It attracts different types of people for me to do business with, find out new things. It’s like holding a key right now.”