GOSSIPONTHIS.COM Hip Hop WATCH: Cardi B Brags About Drugging Men & Setting Them Up With... 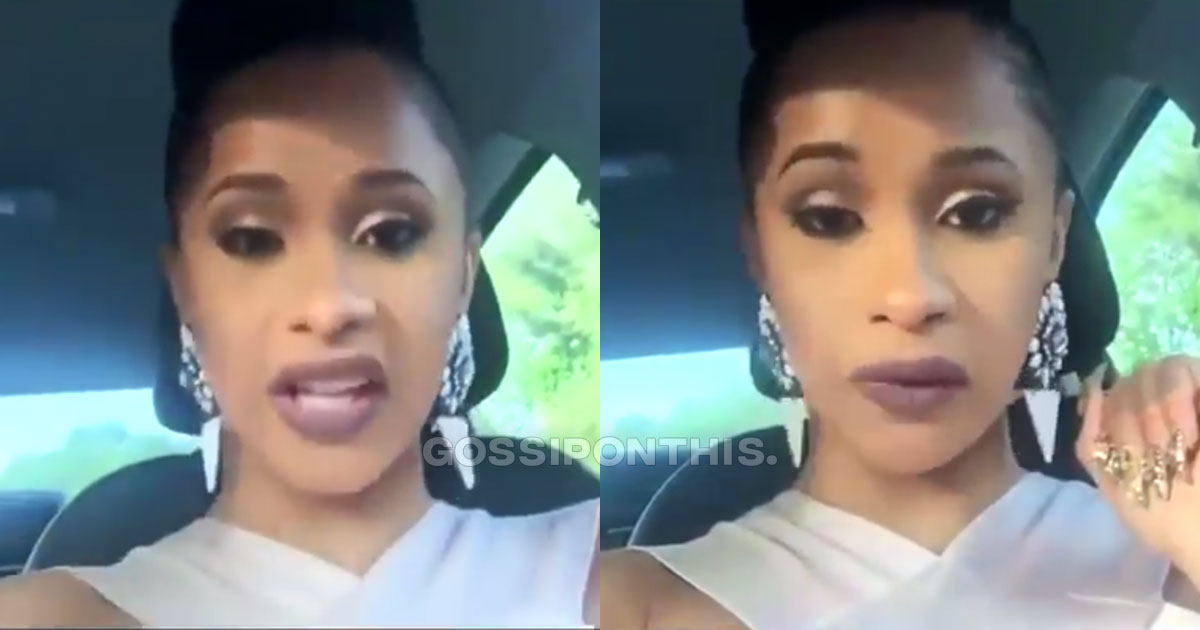 This is just not Cardi B’s week. Yet another video clip of her bragging about drugging men has resurfaced and is being shared all over social media.

Earlier this week, the “Please Me” rapper was forced to apologize for an old video that went viral where she talks about how she used to drug and rob men who would proposition her for sex back in her stripper days. And now another video of her talking about doing disturbing things to men has gone viral.

As the #SurvivingCardiB hashtag took over Twitter in response to the first video, internet sleuths uncovered a second video in which Cardi breaks down in graphic detail how she would get back at a man who cheats on her.

Cardi concluded her disturbing rant by telling her female fans “You don’t gotta f*ck another ni**a to get even bitch, there’s other ways to get even.”

Cardi caught a lot of heat on Twitter over the original video showing her talking about drugging and robbing men.

Cardi was clearly speaking in the past tense, and the video itself is three years old, according to the rapper herself, but that didn’t stop the clip from going viral on social media and inspiring the hashtag #SurvivingCardiB, an obvious reference to the Lifetime docu-series Surviving R. Kelly.

Some Twitter users claimed she should lose her endorsement deals, while others (probably Nicki Minaj fans) called for her incarceration.

One user wrote: “Bill Cosby drugged women some 60 years ago. Still people went apeshit. We need to do that NOW TOO!! She didn’t do better! She’s a criminal and belongs to jail.”

Others pointed out a double standard, saying that if Cardi was a man, she would be canceled without question.

“The thing that gets me is if a guy admitted to this publically, they’d be bashed left and right, so why is it ok in the reverse situation?” questioned one user.

And then there were those who came to Cardi’s defense, with one person calling the #SurvivingCardiB hashtag “fake outrage.”

“This #SurvivingCardiB hashtag is just another example of fake outrage,” the Twitter user wrote. “Do you know HOW MANY RAPPERS you would have to CANCEL based on their “street life”? Chile! Tupac, Biggie Smalls, Snoop Dogg, Ice Cube, Jay Z? Do I need to keep going? Nobody said its right. Thats HER REALITY.”

Cardi eventually (kinda sorta) apologized for her comments in the video and explained her thought process at the time she was doing the things she talked about in the clip.

“I never claim to be perfect or come from a perfect world [with] a perfect past I always speak my truth I always own my sh*t,” she said. “I made the choices that I did at the time because I had very limited options. I was blessed to have been able to rise from that but so many women have not … Whether or not they were poor choices at the time I did what I had to do to survive.”