GOSSIPONTHIS.COM News Only 9 KKK Members Showed Up to a Rally in Dayton, Ohio... 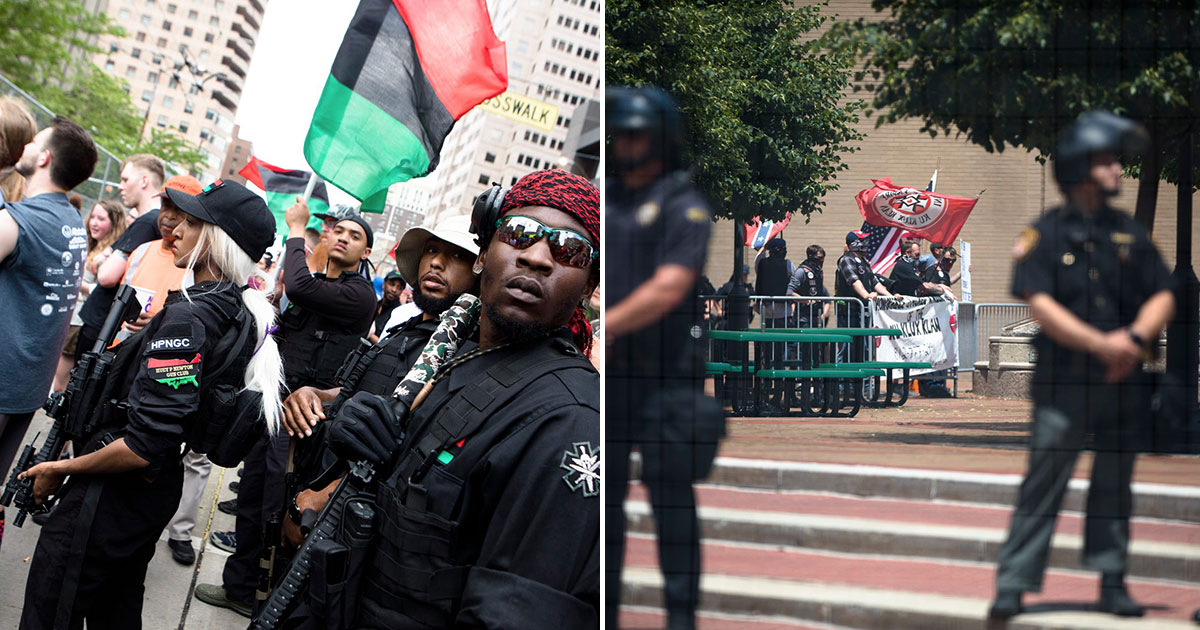 Members of the Ku Klux Klan were vastly outnumbered by hundreds of protesters at a rally in Dayton, Ohio.

Only nine members of the Honorable Sacred Knights—a KKK group from Indiana—showed up to the Dayton rally, while an estimated 500 to 600 counter-protesters gathered to show their opposition to the hate group’s message.

The Klan-affiliated group was confined to the courthouse square, and the members were separated from protestors by a fence. In the end, however, the protest remained peaceful and there were “no arrests, no citations and no use of force,” Neace said.

Dayton City Manager Shelley Dickstein told the Dayton Daily News that the KKK rally cost the city about $650,000 in personnel and materials.

Anti-Klan protesters, including some dressed to support the Black Panthers and the Antifa, shouted slogans such as “band against the Klan,” according to local media reports. Signs seen in the crowd included, “You Are Not Welcome Here” and “Injustice Anywhere Is a Threat to Justice Everywhere.”

“There is a great crowd of people down here on Main Street,” City Commissioner Darryl Fairchild told WHIO TV7. “This is probably Dayton at its best.”

Local Dayton businesses also showed their support for the anti-Klan protest, with “Get your hatin’ out of Dayton,” a popular slogan.

After the protests, Dayton Mayor Nan Whaley shared her relief that the day had proceeded peacefully in a message on Twitter. She said that the event has helped to highlight persistent problems with segregation in Dayton.

“This ugly chapter is over, but it means we have to get back to the real work – making sure that no matter what you look like, where you come from, or who you love, that you can have a great life here in Dayton,” Whaley wrote.

Group, some wearing traditional Black Panther gear such as black berets, now marches on the main counter-protest area outside the KKK rally in Dayton. pic.twitter.com/B3H9Ya0OBg

the KKK have a rally today in Dayton, Ohio and this is how the businesses are responding.. pic.twitter.com/mnhkpEiVUg

Police presence here is constant, in and among and outside the assembled crowd. We’ve heard numbers from our Dayton affiliate approaching 700 local and regional officers here in Dayton to attempt to secure the KKK rally. pic.twitter.com/gIKeeeDSrq

This ugly chapter is over, but it means we have to get back to the real work – making sure that no matter what you look like, where you come from, or who you love, that you can have a great life here in Dayton. Please see my full statement below. #UnitedAgainstHateDYT pic.twitter.com/25JyRCjZRY

We need more of this energy at future KKK rallies all over the country!