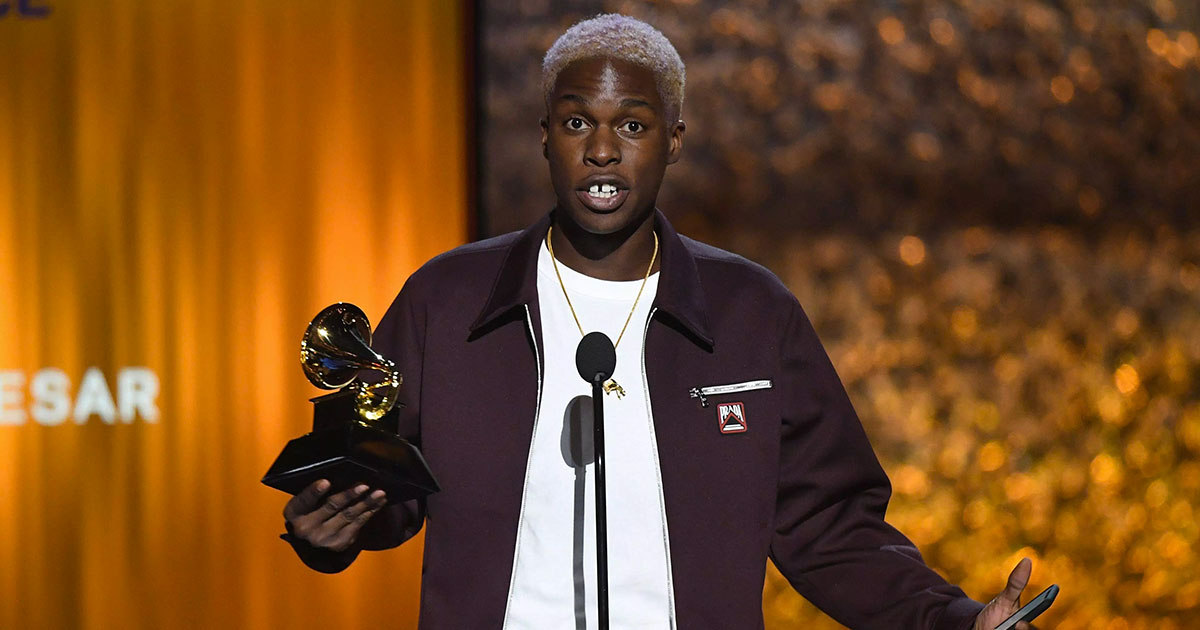 Daniel Caesar found himself on the wrong side of Black Twitter after he made some pretty ridiculous comments about how black folks are way too sensitive and should be more like wypipo.

Last night, the facially challenged Canadian singer hopped on Instagram Live to defend his white friend YesJulz against comments from black people that she’s a culture vulture, and berated his own kind in the process.

Quick backstory: YesJulz (real name: Julieanna Goddard) recently went on the “Easily Offended” podcast and shaded TV personality Scottie Beam and social media influencer Karen Civil for checking her about her wearing a t-shirt with the n-word on it, and was rightfully dragged on Twitter for it.

She also said in a freestyle (which was pretty terrible, tbh):

“Because my ass is fat and my skin ain’t black, I’m the vulture they’re huntin, and yet they never do nothin, they never give back, they keep killing blacks…”

YesJulz’ recent Twitter dragging inspired Daniel Caesar to transform into captain save a hoe and he swooped in to ask black people “why you gotta be so rude?” in defense of his melanin deficient friend.

“Why are we being so mean to Julz?” Daniel said in response to YesJulz’ appearance on the “Easily Offended” podcast.

“Why are we being so mean to white people right now? That’s a serious question. Why is it that we’re allowed to be disrespectful and rude to everybody else and when anybody returns any type of energy to us… That’s not equality. I don’t wanna be treated like I can’t take a joke.”

Relating his feelings back to his recent appearance on John Mayer’s Instagram Live show “Current Mood,” where Dave Chappelle called him “very gay,” Caesar said: “I don’t wanna be treated like a can’t take a joke. I just went through that fucking Chappelle shit and I had to, in the moment, acknowledge that I was being fucking sensitive, and that I need to be able to take a joke just like everybody else. That’s what it is.”

He continued: “People are allowed to say whatever the fuck they want and I’m allowed to feel how I want but am I going to fight them or am I going to accept what they have to say and keep it fucking moving. The only people that I don’t respect and who I think can’t take a joke, I think that they’re less than me. Those are the people who I don’t say my honest opinion around and that’s disrespect.”

“Are we winning right now as a culture? Are we popular in society? We’re not. And you can’t win the game by choosing to not accept the winning team’s strategy. You have to acknowledge their strategy and build a strategy on top of that.”

The “Best Part” singer went on to say that “being a victim doesn’t get you paid” and suggested that anyone who doesn’t agree with him should cancel him.

“I’ve said what I’ve said before and y’all tried to cancel me and I apologized like a bitch,” he said. “I don’t believe in that shit ’cause I think you guys are wrong and I think I’m right … and you can cancel me. Don’t listen to my next shit if you think I’m shit … Make me broke, make me suffer for my opinion. I believe in it.”

Needless to say … Black Gollum’s comments didn’t go well with black people, which resulted in him receiving a hilarious Twitter dragging of his own:

Daniel Caesar really fixed his mouth (and I use that phrase very loosely) to say the divide (like his teeth) between blacks and whites are because we are mean to them. I'm shaken to the root (canal).

Daniel Caesar asked us to bridge the gap, when he can’t even bridge his… pic.twitter.com/fYJiKmhGmG

Daniel Caesar was among the first and only niggas to defend K*nye’s slavery comments and you actually thought he wouldn’t defend Yes Julz?? pic.twitter.com/IexZhZQjQU

Things were better for Daniel Caesar when he spoke less and was being mistaken for Tracy Chapman.

Ain't know who Daniel Caesar is until now but he already look in like: pic.twitter.com/UbTq1C7NVC

I don't even have any Daniel Caesar in my library to remove. Nothing to cancel. pic.twitter.com/bQpixzqfqY

Black Twitter after finding out why Daniel Caesar is trending pic.twitter.com/O6brO6zyzG

Daniel Caesar not the hill to die on. Literally nobody called that nigga ugly until today. He was living a privileged life for someone who looks like a foot.

Last year a friend told me @desusnice said I reminded him of Daniel Caesar and I didn't even know who that was, but now that i do, I'm gonna have to cancel my Showtime subscription for the disrespect!

what’s wild is that black women were the 1st and main ones defending Daniel Caesar when people came for his unconventional looks and he just… pic.twitter.com/wON3uK0QvF

Daniel Caesar "Be nice to white people, they're the winning team"

Daniel Caesar is morphing into Uncle Ruckus before our eyes pic.twitter.com/8ZQvNQarzq

Daniel Caesar when he thinks about yesjulz pic.twitter.com/wbcTSljlJ9

I shoulda known Daniel Caesar would cape for a white woman after he said strippers in New Orleans don't shake booty like Priscilla do.

Daniel Caesar had THE wedding song on LOCK for the next 20 years. Then he wanted to be captain save a ho for YesJulz culture vulture ass.

daniel caesar side salad is ready to risk his career for a white woman who exploits black ppl and degrade and dehumanize black women. sheesh… i wonder what black men get from saving a white woman from being a complete racist…? … pussy ? cuz pic.twitter.com/x8lYHK3ZVm