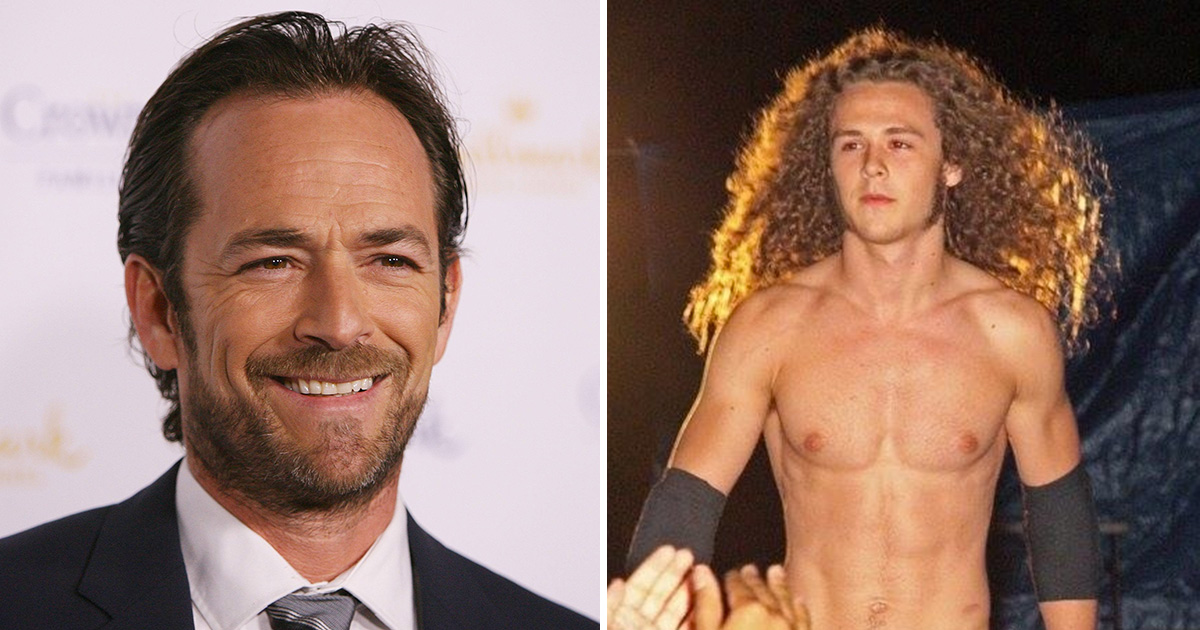 Jack Perry is the only son of actor Luke Perry, who died Monday (Mar. 4) after being hospitalized following a massive stroke on Wednesday (Feb. 27).

According to Luke Perry’s publicist, his family was by his side at the time of his passing, including his son Jack, his daughter Sophie, his ex-wife, his fiancée Wendy Madison Bauer, and his mother, step-father and siblings.

The family’s statement read in part: “The family appreciates the outpouring of support and prayers that have been extended to Luke from around the world, and respectfully request privacy in this time of great mourning.”

Here’s what you need to know about Luke Perry’s son Jack.

1Jack Perry is a professional wrestler who goes by the name “Jungle Boy” Nate Coy.

According to Woman’s Day, Jack Perry is a professional wrestler who goes by the ring name “Jungle Boy Nate Coy.”

Perry began wrestling on the independent scene in California in 2015. He signed with All Elite Wrestling in January 2019, according to Wrestling Inc, and he’s set to compete in the upcoming AEW Double or Nothing in Las Vegas at the MGM Garden Arena.

Jack’s father, Luke, apparently played a huge role in his signing details, with Wrestling Inc reporting that “Jack, his father and his legal team felt it was best for him to not sign a deal over 2 years at this point in his early career.”

Luke was also a supportive father who showed up to his son’s wrestling matches. Photographers spotted him at one event in January 2017.

2Perry (aka “Jungle Boy”) has over 6K followers on Instagram, which he uses to promote his wrestling career.

Perry’s Instagram username is @boy_myth_legend and his name on IG is “Jungle Boy, Jack Perry.”

The page has a limited number of photos and videos and it is apparently only used for professional purposes, as there are no photos or videos of his family.

He does, however, have a personal Facebook, which is somewhat public. His most recent public post was a message on January 24th that read: “Thank you so much to everyone who has supported me. I am officially signed with All Elite Wrestling. Time to change the world.”

He wrote along with a profile image he shared in August: “I have my ups and downs, but I’m built for this shit.”

3Luke Perry and Rachel “Minnie” Sharp, were married for 10 years and had two children.

Jack’s parents were married for ten years before divorcing in 2003.

Luke Perry was 27 years old when he married Rachel “Minnie” Sharp, who was 24 at the time, in 1993. The couple had a small, private wedding that was only attended by about 50 guests, including family and some of Luke’s Beverly Hills 90210 castmates. They dated for two years before marrying.

Sharp is a one-time actress who appeared in the film “Teen Wolf 2,” but didn’t pursue acting as a career and remained out of the spotlight.

There were tabloid rumors that Sharp met Perry after sending him lingerie as a fan, but Luke denied that, saying that they met in a restaurant. “It’s that simple,” he said, according to People.

During the years together, Luke and Rachel lived on what Luke called “an old house on one acre.”

After they divorced, Perry and Sharp shared joint custody of their children.