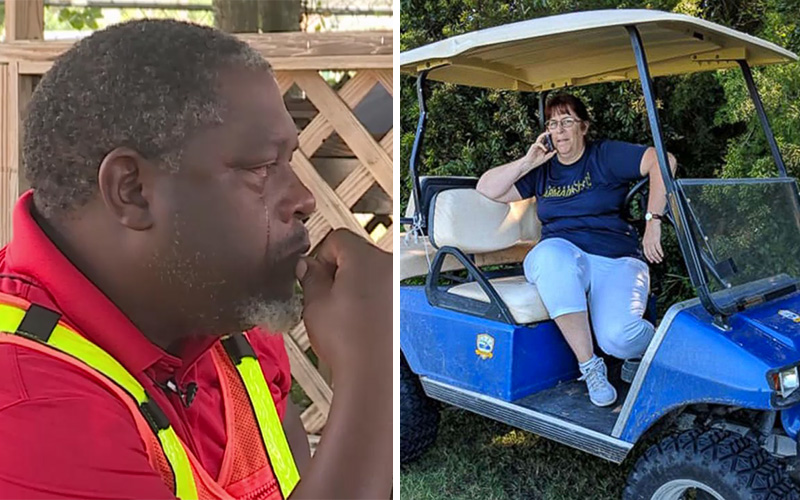 It’s a tale that has now, sadly, become as old as time. Yet another white woman has called the cops on a black man for the simple fact that he had the audacity to live in America while not being white.

What was the cause of the latest in this long-running string of incidents? A man telling his son to listen to the refs at his youth soccer game.

That’s right. Gerald Jones was doing nothing but trying to teach his son to listen to the refs during his game when all of the sudden “Golfcart Gail” decided it was necessary to bring in the authorities.

The unnamed woman, only identified as a field marshal for the Ponte Vedra Athletic Association in Ponte Vedra Beach, Fla., allegedly told the responding officers that “she feared for herself and the children because she didn’t know what he [Jones] was capable of.”

The woman, now known as “Golf Cart Gail,” claims that she reported Jones for “harassment” against the refs, yet witnesses who filmed the encounter say that Jones did nothing wrong; he was simply telling his son, who was on the field of play, to listen to the referee overseeing the match.

One Facebook user was quoted as saying: “A parent at my son’s soccer game had the police called on him for cheering for his son during the game. The man was simply trying to watch his son’s soccer game and cheer for him from the sides. He yelled ‘The ref is right!’ when he saw his kid out there gettin frustrated after a call.”

After hearing both sides of the argument, the responding officers let Jones leave, yet the Ponte Vedra Athletic Association is coming to Golfcart Gail’s defense, issuing a lengthy statement basically saying she was in the right to call the cops.

“The Ponte Vedra Palm Valley Athletic Association puts the welfare of children above all else,” wrote Gary Easom, president of the association. “That is an extreme circumstance which seldom occurs, but that is exactly what happened in this situation…The field marshal acted appropriately and without malice to ensure the welfare of the children she is charged with protecting.”

Hold up, so she’s in the right by calling the cops on a father trying to teach his son to respect the proper authorities? C’mon, man.

It’s one thing if this was an isolated incident, but we all know it’s not. Do I need to run down the list of occurrences again? Honestly, it’s getting to be so commonplace, we can’t even come up with original names anymore. Just this week we had Gas Station Gail, now we’ve got Golf Cart Gail?

It’s tough to keep track at this point. And since I can’t fix the issue of racial injustice and inequality, at least let me fight for the right to be creative and identify these people on an individual basis. You’re telling me no one could think of Golf Cart Glenda? Golf Cart Grace? Maybe even Golf Cart Genna?

Let’s not let these people slip back into anonymity just because we can’t think of more original names. Golf Cart (insert your preferred G-name here), we see you, and believe you me, the internet never EVER forgets.

As for the situation at hand, Jones is saying that he is owed an apology, telling ABC News, “Anything could have escalated—me going to jail, my kid seeing me like that,” as he broke down in tears.