GOSSIPONTHIS.COM Viral Videos We Got Another White Lady Calling the Cops Black People for Nothing:... 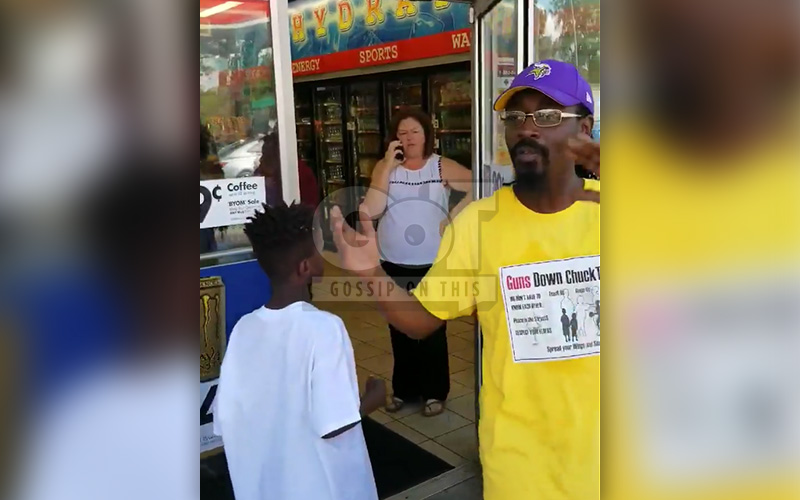 “I need a police officer here now. I have, like 30 people standing out here and they will not leave! It’s like a riot out here. They’re destroying the outside … they’re standing outside my store, they’re videoing us and everything” — Brenda aka “Gas Station Gail.”

Wow, I can only imagine that as a 911 dispatcher, calls like this must send shivers down their spines. A call comes through and you have a frantic woman desperately pleading for help while trying to survive a violent riot.

You take down her location, locate the nearest responding officer, and then simply pray the officer can get there in time before the incident turns tragic.

And now Gossip On This has managed to get footage of the “riot” in question. I warn you, what you are about to see may be disturbing. Viewer direction is most certainly advised.

Just…wow. It’s tough to watch. I mean just go back and listen to the horrible, hate-filled speech being thrown at this poor, brave woman. “You don’t gotta be rude.” “Look at that, she’s calling the police.” And worst of all, “In a respectful manner, let’s leave.”

I can’t imagine the emotional scars those are going to leave. And those last shots of this violent gang finally leaving, politely walking away surrounded by children and pushing strollers. Scary stuff, man!

Kidding aside, this is disturbing, because it’s just one more instance in a long line of examples of black citizens being harassed for having the gall to live their lives. I mean we have Cornerstore Caroline, Hallway Hillary, BBQ Becky, Permit Patty … the list, sadly, goes on and on.

So what was the horrible thing this group was doing before “Gas Station Gail” decided the cops needed to be called? Trying to buy some drinks for their thirsty children.

They were a part of a peaceful march in North Charleston, South Carolina meant to help put an end to gun violence and were wearing anti-violence T-shirts that read “Guns Down Chuck Town.”

After marching for a mile, the group stopped by Murphy’s Gas Station to get drinks for themselves and their children when, next thing they know, the cops are being called.

The man who posted the video, Jonathan Thrower, told Yahoo Lifestyle: “A cashier came outside and said, ‘OK, I just want to make sure everyone stays on the sidewalk.’ A few minutes later, a red truck pulls up and a woman gets out and starts yelling, ‘Leave no! Leave now! I’m calling 911.”

“I felt sick when I heard the 911 call,” Thrower said. “A few kids said, ‘Every time we try to do something good, they call the police.’ I kept reassuring them that this was part of conflict resolution and why we walked that day.”

Gas Station Gail was not hurt and can continue to live her life vigilantly stopping non-white people from getting drinks, but unfortunately for her, Thrower’s last threat looks to be coming true: “We just gotta make this go viral.”