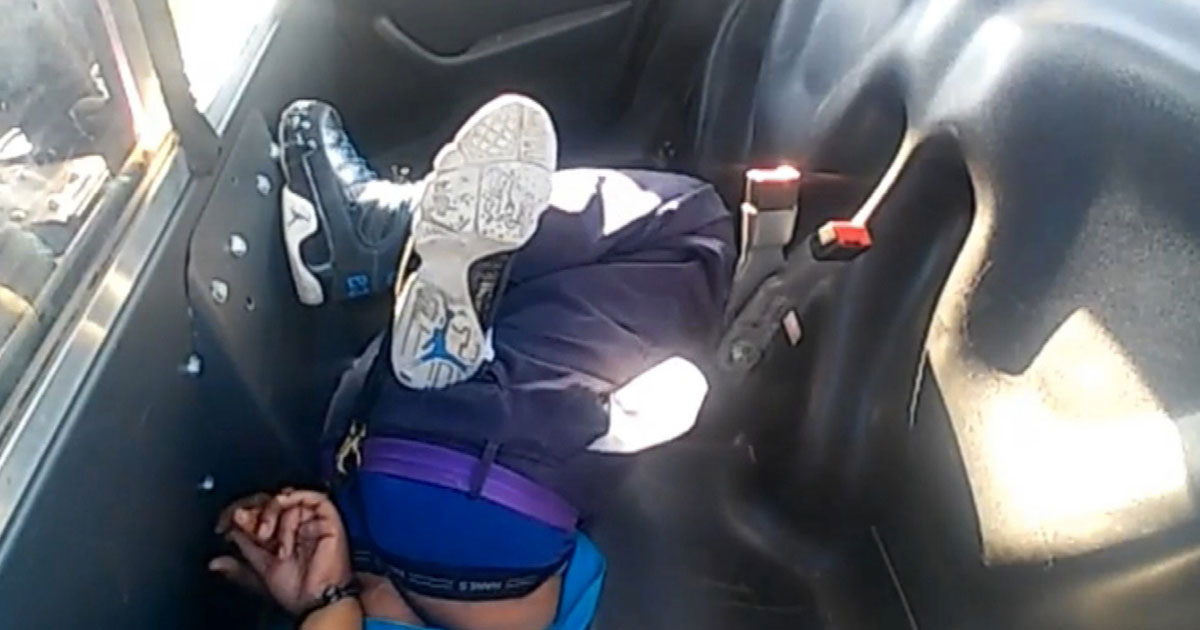 A Black woman who was arrested by an Aurora, Colorado police officer was handcuffed, hogtied, and tossed into the back of a patrol car, where she was forced to ride upside down, begging for help for over 20 minutes, fearing that she would die … and the whole thing was caught on video.

The disturbing footage shows 28-year-old Shataean Kelly after her arrest on August 27th, 2019 for fighting and other minor charges.

The arresting officer, Levi Huffine, can be heard in bodycam video telling Kelly she would be “hobbled” as punishment for trying to escape his patrol car by trying to open the door handles in the backseat.

But on the way to jail, while riding in the backseat with her handcuffed hands tied to her feet, Kelly slipped off the seat headfirst onto the floor and became inverted, with her legs in the air.

According to an internal affairs investigation, Kelly rode that way for 21 minutes, and during that time, she can be heard in the newly released video begging for her life, fearing that she might break her neck or suffocate.

“Officer please, I can’t breathe,” Kelly pleaded with Officer Huffine, who ignored her.

“I don’t want to die like this. I’m about to break my neck,” she cried, adding: “My neck is killing me dude. Help me, I can’t breathe.”

At one point, Kelly told the officer: “I never felt so much racism in my life … This is some slavery sh*t.”

And out of desperation, Kelly actually considered herself to be a slave, asking the officer: “How many times I gotta beg you master?”

For what it’s worth … all criminal charges against Kelly were eventually dropped, and Huffine was fired over the incident back in February.

The Aurora Police Department is now releasing the footage because Huffine is now appealing his termination.

Aurora Police Chief Vanessa Wilson testified during Huffine’s appeal hearing that the door handles in the backseats of cop cars are inoperable, and she believes Huffine was “punishing” Kelly.

“In my opinion she was just tortured back there. It makes me sick,” Wilson said after watching the video again Tuesday (Sep. 30). “We are not judge, jury and executer. We are not to treat people inhumanely like they don’t matter.”

“And he is lucky she did not die in the backseat of that car,” Wilson said. “Because he would be—in my opinion—in an orange jumpsuit right now.”

Wilson said Kelly calling Huffine “master” was one of the most bothersome moments of the footage.

“As an African-American female she denigrates herself to the point she actually calls him ‘master.’ To me that is disgusting,” she said.

“If that doesn’t make you sick watching that video, I don’t know,” Wilson added. “It’s beyond human decency for me. It’s unacceptable. I don’t know what else to say.”