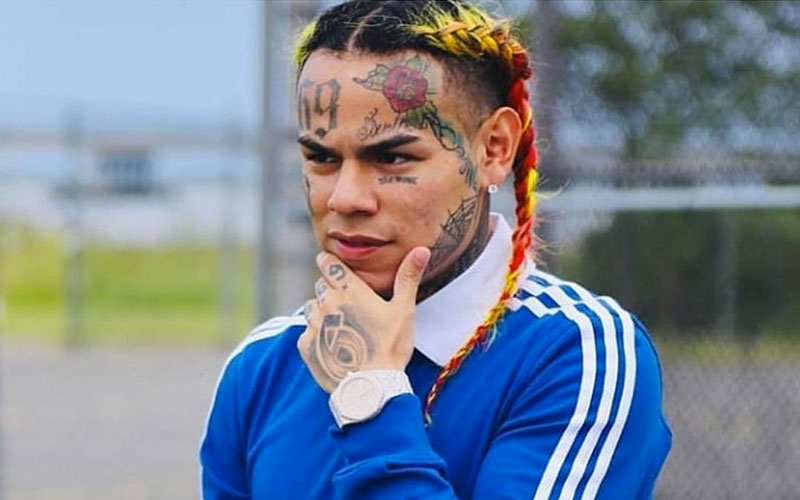 Tekashi 6ix9ine was the subject of a celebrity death hoax Friday night (Sep. 14) after a tweet from DJ Akademiks went viral saying that the rapper had been “shot multiple times” and was “currently in critical life threatening condition.”

The tweet led to a large number of extremely upset and confused fans to believe that the read was either dead or clinging to his life after almost being shot to death. However, 6ix9ine is still alive. The shooting report is 100% false.

Here is a screenshot of the tweet that sparked the social media frenzy: Reactions to the tweet were mixed, with some celebrating news of the rapper being shot and others expressing confusion over whether or not the reports were true.

Stop saying @6ix9ine got shot if he didn't its not funny

Eva started crying when she found out 6ix9ine was shot ;/

so if 6ix9ine dies we’re not gonna act like his music is good right?

Wishing @6ix9ine the best. Whether you like him or not doesn’t matter. This is happening too much and the fact people are anxiously waiting to here if he’s dead or not is disgusting.

Others were relieved that Tekashi 6ix9ine being shot was fake news:

Omg I got scared about 6ix9ine lmg

Akademiks later took to Twitter to assure fans that Tekashi 69 was OK and had not been shot. The famous internet personality said his Twitter account had been compromised by hackers.

“Lol, I’m hacked,” he tweeted. “Yeah… I believe a app that had authorized access to Tweet on my account got hacked and they tweeted thru that to get to my acct. Dont think those hackers even got my password.. Reminder to everyone… revoke access in ur twitter settings to all apps that aren’t official.”

Sorry for the confusion… I spend a lot of time tryna make sure that doesn't happen. Forgive me.

Prior to the “6ix9ine has been shot multiple times” tweet, the hackers had some fun using DJ Akademiks’ Twitter account. One series of tweets read: “6ix9ine is a bitch … A F***ING BITCH … LIL PUMP SH**S ON 6ix9ine.” Whoever hacked the YouTube star’s Twitter account also shared a tweet saying: “Bhad Babbie got mad titties for a 15 year old,” referring to rapper Bhad Bhabie (aka the “Cash Me Ousside Girl”), whose real name is Danielle Bregoli. DJ Akademiks warned his followers that his account “might be still hacked” and to “ignore anything from my accts till the morning.”

actually lol.. i might be still hacked. gimme a sec. ignore anything from any of my accts till the morning.

He also threw some shade at rappers who were DM’ing his hacked account asking the hacker to promote their music on his Twitter. “I thought that level of desperation was reserved for soundcloud rappers on the comeup,” he said.

Lol… its sad that I have real rappers who are millionaires DM'ing me while im Hacked asking the hacker to tweet out and promote their music… I thought that level of desperation was reserved for soundcloud rappers on the comeup.

This isn’t the first time that Tekashi 6ix9ine has been the subject of a death hoax. In fact, in 2017, he sparked rumors himself when he jokingly posted a video on Instagram where he’s seen being pushed ina hospital bed with his entire body covered by a white sheet.

The voice in the video says: “Rest in peace my man 6ix9ine. Rest in peace 6ix9ine, you a legend.” At the end of the clip, you can see Tekashi pick his head up and start smiling.

Tekashi was also close friends with rapper XXXTentacion, who was shot and killed back in June. After X’s shooting death, 6ix9ine posted a video on Instagram saying that he would stop trolling (or at least tone it down) because tomorrow isn’t promised to anyone.