GOSSIPONTHIS.COM Sports The Internet Is Going Crazy Over LeBron Signing With the Lakers: Check... 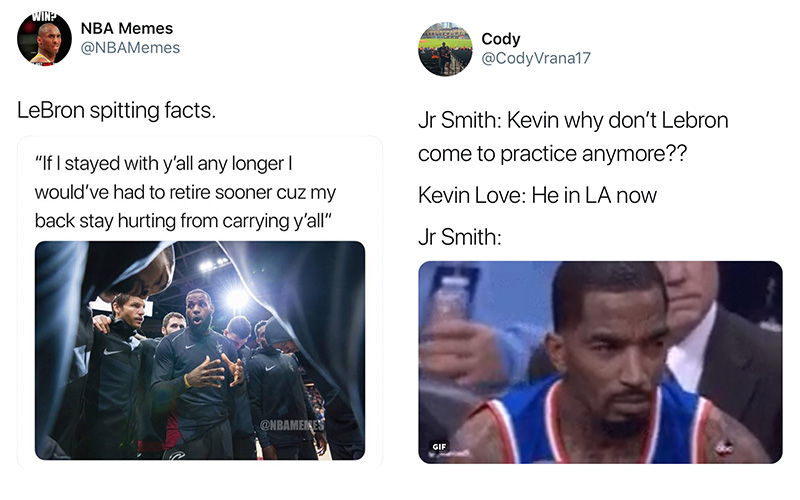 Unless you live under the world’s biggest rock, by now you’ve already heard that LeBron James will spend the next four years of his professional basketball career as a member of the Los Angeles Lakers and will be getting paid $154 million to do so.

As expected, the internet went NUTS over the news and took no time posting hilarious memes, jokes and GIFs all over social media, especially Twitter. And while most of the memes focused on LeBron’s “Decision 2018,” a fair amount of them also focused on Lance Stephen also agreeing to join LeBron in his new quest to add to his collection of championship rings. Kobe Bryant, J.R. Smith and Lonzo Ball also made a few appearances.

Check out some of the best/funniest reactions to LeBron James joining the L.A. Lakers below:

"Hey JR, This is your new teammate. His name is Collin." pic.twitter.com/sjCw69kxXE

Kevin Love: He in LA now

LeBron- ”JR we ain’t on the same team anymore.”

“LeBron did WHAT? …yeah, I’ll be there.” pic.twitter.com/DkgAYhzZ6C

Lebron leaving Cleveland and heading to the lakers like.. pic.twitter.com/w3PapRhOJj

J.R: "Why is LeBron in a #Lakers jersey?" pic.twitter.com/GRI74bstLC

JR: “Yo LeBron, u look skinnier”

I will follow LEBRON into the gates of hell https://t.co/b6uM69TCbI

Lebron leaving the cavs on the way to Lakers pic.twitter.com/7PPk2OFK7V

LeBron on his way to LA to play with the Lakers pic.twitter.com/p7Yin5CJRU

That feeling when you may not be the greatest Laker ever anymore… pic.twitter.com/JKkMNKMeaB

Magic on his way to the Lakers meeting then running off to LeBron's house pic.twitter.com/UvOdx7K5e3

When LeBron James heard about Lance Stephenson signing with the Lakers pic.twitter.com/KybMj85bhX

Welcome to the bandwagon! pic.twitter.com/MrXsIcpop9