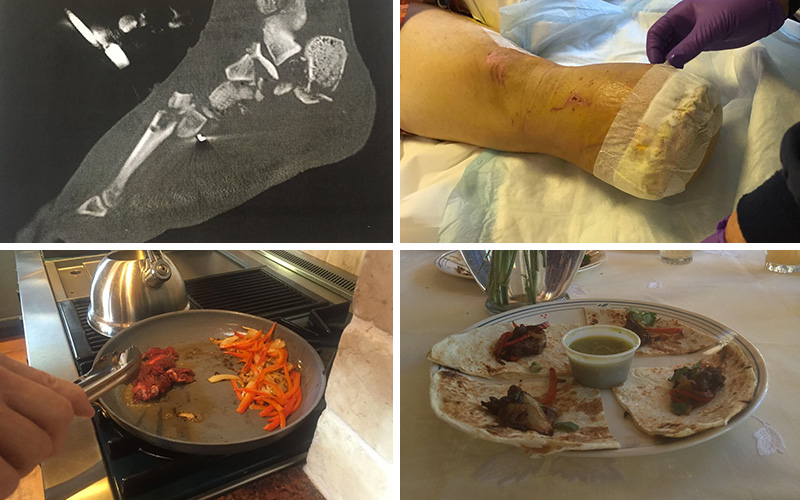 Ladies and gentlemen, I honestly didn’t think it was possible, but I believe we have officially reached peak caucasity. Like, there is literally nothing that can surpass the level of “WTF, WYPIPO?!” in this story.

In what can only be described as the most white people sh*t you will probably ever hear in your lifetime, a man has admitted to serving his friends tacos made from his amputated foot … and his friends were in on the whole thing. Happy Taco Tuesday!

About two years ago, the man in question was knocked off his motorcycle so bad that he flew into a nearby forest and crushed his foot beyond repair. When doctors told him it was inoperable and he would never be able to walk on it again, they asked him if he wanted to amputate it. He said yes, but he had one question for them: “Can I keep it?”

Doctors allowed him to keep his amputated foot, and on Sunday, July 10th, 2016, just three weeks after the accident, the man (who prefers to remain anonymous for obvious reasons) invited 11 of his most open-minded friends to a special meal. 10 out of the 11 friends agreed.

Their meal consisted of apple strudel, quiche puff pastries, fruit tarts and chocolate cake. They sipped on gin lemonade punches and mimosas. And their main course? Fajita tacos made from the man’s severed foot.

The man, known simply as his Reddit username IncrediblyShinyShart, detailed the whole experience in a Reddit AMA (Ask Me Anything) as well as a recent interview with Vice.

And just in case you’re one of those “pics or it didn’t happen” type of people, he documented the entire ordeal in a photo gallery on imgur, which you can see here … but be warned, the photos there are EXTREMELY GRAPHIC. No, seriously, the very first photo might make you empty your entire stomach contents. YOU HAVE BEEN WARNED.

The biggest question one would have for IncrediblyShinyShart is … “BUT, WHY THO?!”

Here’s what he said:

So my friends and I always had this joke, If you could try human flesh in an ethical and healthy way, would you. And we always said of course. Well the opportunity came up and I called them on it.

Originally I wanted to have [my foot] taxidermied or freeze-dried. How cool would it be to have my freeze-dried or taxidermied foot standing around the house as a lamp or a doorstop or something? All of this came out of the idea that it’s my foot. It’s not going to be cremated and chucked into a landfill. It’s a part of me, and I want it back. How did he convince the doctor to just hand over his severed foot?

Most hospitals have policies where they will release your body parts to you because of some religions where you have to be buried whole, so I just signed the paperwork. My mom, who was helping me get back on my feet, so to speak, drove me back to pick it up. She doesn’t know I ate it, though. I went inside and the hospital gave me my foot in a red plastic biowaste bag. I brought it to the car and immediately put it in a cooler. It was pretty bizarre. I got back to my place and I froze it. I couldn’t find a taxidermist who would take me seriously and freeze-drying was too expensive. It would have been $1,200 to freeze dry the thing. If I had the money I would have done it. Eventually, I decided to cast it in plaster to use as a doorstop, then capture a 3D rendering so I can make little keychains.

When we got back to my house, I took the foot out, and it was so gross, man. It was covered in blood and had iodine all over it. After I cleaned it off, I was pleasantly surprised by how well-preserved it was. It’s not like they preserved it in formaldehyde or anything. But when you think about beef, which can be dry-aged for months, I suppose it makes sense.

I had four friends with me at the time, and it was all surreal. We picked it up and were playing with it. It didn’t seem like it was a foot. It just seemed like an object, not a piece of a person. There was no emotional connection. I could think, “Yep, that’s my foot right there,” but there wasn’t some deep part of me that felt weirded out by it. In fact, that was the weirdest part, was that it wasn’t weird.

Before we cast it, I quickly took a knife from my kitchen and cut a chunk off the top of my shin. The skin was already kind of off from the surgery, leaving a big chunk of muscle exposed. I just took the muscle. I put it in a plastic bag and put it in my freezer.

After we cast the leg, I took a bunch of pictures, put it in a box of flowers, and cremated it. Speaking on who would be eating his severed foot, he said:

I called folks who might be amenable. It was only about 2-3 oz that I took off the leg so it couldn’t be a big group, plus only people I knew very well…

I invited 11 people. I said something like, “Remember how we always talked about how, if we ever had the chance to ethically eat human meat, would you do it? Well, I’m calling you on that. We doing this or what?” Ten said yes. I guess we’re a weird group.

There were several different friend groups involved. I approached one group with the idea and they were like, “Totally.” Because how often are you going to get this chance? One friend said she’d ask her boyfriend, a chef, if he would do the cooking. Perfect.

The final tally was the chef and his girlfriend, my ex-girlfriend, one friend from college, two friends I’d had for a couple of years, two I’d known for over 10 years, and one of their daughters, who had also helped me cast the foot. It was a close group. Another obvious question: How did he cook the foot?

I told the chef my idea and after thinking about it for a couple days he said, “OK, let’s do this. I’m going to prepare it, and you guys just come over tomorrow.”

He marinated it overnight and sauteed it with onions, peppers, salt, pepper, and lime juice. Then he served it on corn tortillas with a tomatillo sauce. [Read the full recipe, transcribed by the chef, here.] And the most obvious question of them all: What did the foot taste like?

People think it tastes like pork because in movies we hear it called “long pig.” But that term originated in places like Papua New Guinea, where they eat wild boar. They’re not eating our big, fat, domesticated pigs that have white meat. Boars don’t have white meat. They just don’t. I remember eating a heritage pig and it was some of the reddest, most flavorful meat I’d ever had. It was almost like venison. And I think it’s more akin to that.

This particular cut was super beefy. It had a very pronounced, beefy flavor to it. The muscle I cut was tough and chewy. It tasted good, but the experience wasn’t the best.

On this scale, I would give it a solid 6.5, but keep in mind that I have had a lot of good food. So it’s way better than a hot dog or regular burger. Maybe equal with regular bacon, which is pretty decent. But nowhere near as good as butter seared sea scallops or a rare sous vide tenderloin seared in grapeseed oil in a cast iron pan.

It was from a healthy part of the amputation, I’m a healthy person, waste not, want not, and they [my friends] all consented. As far as I know, they are all still cool with it. It’s a fun weird thing.

There was this queasy anticipation. We all looked at each other like, “We doing this, right? We’re doing this.”

There was very dark humor, which we all already have in spades. I think that’s why this went so well. We were cracking jokes the whole time. I said at one point, “Well, today was the day I was inside 10 of my friends at once.” I got a phone call the next day from a friend saying, “Hey, just so you know, I pooped you out. Sorry.”

There was a sense that this was a bonding experience. We could share this really unique experience together. And it was a way for me to close a lid on this part of my life.

Asked why he decided to tell the story two years after it happened, he said:

It’s a story that’s great to tell someone who already knows you, but it weirds a lot of people out. It’s taken me time to get comfortable with it. It’s pretty out there. I put it out on Reddit because it’s pretty much anonymous. I like the really outrageous stuff that some people post there, and I felt this was a way I could properly contribute to this community.

What I did was technically not illegal. I didn’t sell it. I didn’t give it to people without their consent. It was mine. We couldn’t find any real laws against weird stuff like this. So I’m not worried about legal stuff. I just don’t want to be known as that weird cannibal guy. It doesn’t really represent who I am.

He ended his interview with Vice by explaining how eating his own foot changed the way he feels about cannibalism:

It has a stigma. It’s associated with cultures that aren’t perceived as civilized, or situations where people are forced into it to survive. They see it as barbaric, so they wonder why I would go out and do it on a whim. But people eat the placenta after a child is born. That’s cannibalism, I don’t see any way around it.

I think you can ethically be a cannibal in certain situations. I don’t have some hunger to go hunt people down and gnaw off their faces. This was one experience where I had the chance to do something unique in a healthy and ethical manner. I did it and it was fun and cool, and I have a great story.

If this isn’t the most white people sh*t you’ve ever heard of, I don’t know what is.