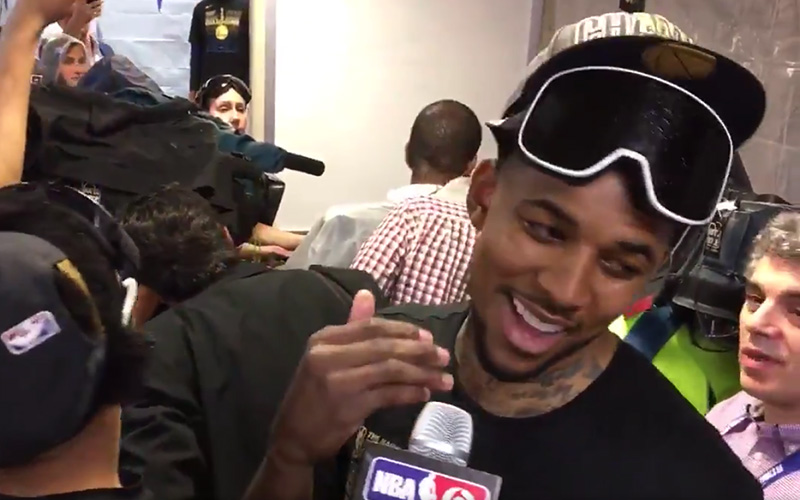 Nick Young, also known by his God-given nickname “Swaggy P,” is hella excited about winning his first NBA championship, and he isn’t letting ANYONE steal his joy, you hear me?

Even though he only scored a total of 5 points throughout the entire 4-game series, Young is probably the most excited Golden State Warrior. See the below video of him strutting down the floor at the end of Game 4 as the clock ran out for proof:

#Warriors Nick Young. Because everyone gets a ring. pic.twitter.com/yo7XPUMWX3

After the game, he called himself the “Swag Champ,” while cradling a massive bottle of Moët champagne.

He even talked about how he’ll be in a museum one day.

And he also gave a Warriors beat reporter a champagne bath, because why not?

But, perhaps, the best moment of Swaggy P’s post-game victory press tour came when he said the following quote: “I’ve came along way, haven’t I? I went from getting snitched on, to putting a ring on”—an obvious reference to that one time his L.A. Lakers teammate D’Angelo Russell broke the guy code and exposed him cheating on his then-girlfriend Iggy Azalea.

“I’ve came a long way, haven’t I? From getting snitched on, to putting a ring on” – @NickSwagyPYoung pic.twitter.com/rXL5i4PXT6

Nick Young: “I went from getting snitched on to putting a ring on!” pic.twitter.com/FpgSRgn0yC

And, of course, Twitter seems to be enjoying every moment of Swaggy P’s celebration:

GRATZ TO SWAGGY P FOR GETTING A RING. Dude definitely deserves it. ?????

The most Swaggy P interview of all time ?? pic.twitter.com/iQ7CeW3gek

“No tattoos on my right arm, strictly for buckets.”

This man is getting a ring. NBA Champion, Nick Swaggy P Young. And the only IGGY he needed was Andre. pic.twitter.com/Xsju8SCTU6

SWAGGY P IS AN NBA CHAMPION

Ever since D’Angelo Russell snitched on Swaggy P for cheating.. Swaggy P has been winning in life.

Swaggy P is a champion ?

I can’t wait for the Summer of Swaggy P

“They can’t say nothing about Swaggy no more… When I go to museums I’m going to say, ‘Swaggy P, champion,” Warriors guard Nick Young said.

Your faves may not have a ring, but guess what? SWAGGY P DOES!

Swaggy P got a ring before Melo, Harden, and CP3. Yikes.

My man swaggy p gon be walking around like this for the next 10 yrs pic.twitter.com/rxjDRZjVat