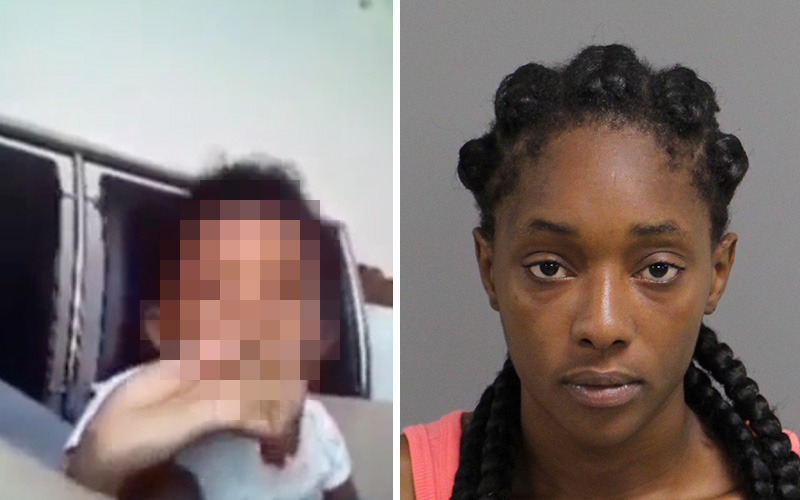 A young mother was arrested after a video she posted on Facebook showing her 1-year-old baby smoking a marijuana blunt went viral, and we have obtained the shocking footage.

20-year-old Brianna Ashanti Lofton of Raleigh, North Carolina was jailed Wednesday (Mar. 21) and hit with two felony counts of child abuse, contributing to the delinquency of a minor, and marijuana possession.

The 10-second video—which was viewed over 1 million times and originally posted on December 1, 2017—shows Lofton holding a cigarillo filled with weed to her infant daughter’s lips as the child appears to inhale and let out a puff of smoke.

A number of people took to the woman’s now-deleted Facebook profile, where she went by the name of “Bree Bhad,” expressing their outrage over the incident.

“I just wanna tap this b*tch head,” Marie Lessa wrote on Lofton’s timeline. “Omm what crazy ass thought was in your head !! That baby hit that blunt like she did it before smh I HOPE YOU ROT IN JAIL and I hope someone that actually cares about the baby can take care of her the most craziest sh*t I ever seen!!”

“I’m seeing this post of hers and I find it so damn stupid,” another FB user commented. “So I’m guessing she wants her child to be f***ed up in the brain when she gets older, right!? She’s going to mess up her health and everything. She’ll be the same parent to neglect the child or pull another Aniya Daye stunt!”

Rasheed Martin from Rochester, New York shared the shocking footage on his own account before urging users to help identify the child’s mother.

“Once more and more people found out about this situation, they showed me a screen grab of her actual Facebook page,” Martin told the Associated Press. Then I later added it to the post so everyone could know exactly who … did that to the poor little girl.”

With the help of Martin and others who watched the video on Facebook, police were made aware of the crime and were able to track down Lofton and arrest her.

“Big thanks to everyone who posted information about the smoking mother and baby,” the Raleigh Police Department posted on their Facebook page. “Thanks to your willingness to get involved, the child is now safe and the mother is in police custody.”

Raleigh police warrants stated Lofton was accused of “causing, encouraging and aiding a one-year-old child to smoke a marijuana blunt.”

This isn’t Lofton’s first run-in with the law. According to court records, she was previously arrested for simple assault in August and July of 2017, just a few months before the video was posted.

Lofton is currently being held at the Wake County Detention Center on $100,000 bond, and her daughter has since been placed in Wake County Child Protective Services.