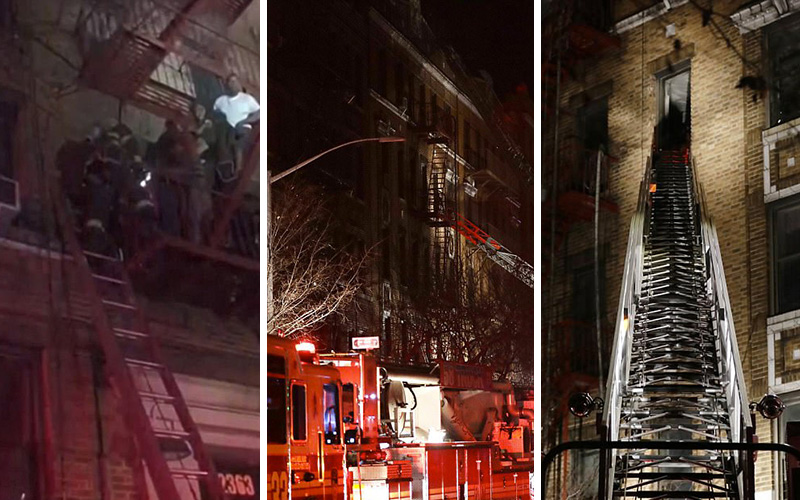 At least 12 people are dead and 15 others were injured following an apartment fire Thursday night (Dec. 28) in the Bronx borough of New York City.

NY Mayor Bill de Blasio confirmed in a press conference that four of the 15 injured are in critical condition and fighting for their lives at a local hospital. “This is the worst fire tragedy we have seen in this city in at least a quarter-century,” de Blasio said, adding that the fire will rank as one of the “worst losses of life to a fire’ in many years for the city.” More than 100 FDNY firefighters worked in bone-chilling cold weather, just 15 degrees, to contain the fire and rescue people from the building. It was so cold that the water from the hoses froze into ice on the street.

FDNY crews are currently battling a four-alarm fire at a residential building in the Bronx. The FDNY says at least 15 people are being evaluated for injuries. pic.twitter.com/QpBQh5WoLA

According to City Department of Building records, the building is a walk-up apartment house with 25 individual units. City records also showed that the building—which is located on Prospect Avenue near East 187th Street, near the Bronx Zoo—had no elevator.

FDNY Fire Commissioner Daniel A. Nigro said that crews were alerted to the fire at 6:51 p.m. EST and the department responded within three minutes. Nigro confirmed that the fire started on the first floor of the building and quickly spread to the fifth floor. “In a department that is certainly no stranger to tragedy, we are shocked by this loss,” he said. “People died on various floors” of the apartment building, Nigro said, adding that the ages of the victims ranged from one-year-old to over 50. Due to the number of lives lost, Nigro called the fire “historic in its magnitude.”

Luz Hernandez, a resident of the building, said she realized something was wrong when she smelled burning rubber in her fourth-floor apartment. She said the smell was quickly followed by smoke so thick that it made her apartment pitch-black. She was able to get to her husband and two sons, 11 and 16, and the four of them climbed out of a window and down the fire escape. Maria Bonilla, who lives a block away from the building, said she was waiting outside to hear word on a friend’s 8-month-old child. “There was a lot of people coming out in stretchers, burned,” she told reporters at the scene. “There was fire, really bad fire,” Bonilla said. “It was crazy,” she said.

Robert Gonzalez, another neighborhood resident who has a friend who lives in the building, told the Associated that his friend got out on a fire escape as another resident fled with five children. “When I got here, she was crying,” Gonzalez said. Photos and video footage of the scene showed firefighters wheeling out victims on stretchers. The firefighters were able to rescue a number of people by climbing up ladders to reach them in their apartments and bring them back down to safety.

4-ALARM FIRE IN BELMONT: 15 serious injuries…@aimerodnews at the scene she has LIVE report from scene at 8:30 @News12BX pic.twitter.com/sh6WRjknsU

“Thank you to the @FDNY and first responders for their bravery and quick action,” Mayor de Blasio said in a statement on Twitter. “And thank you to the medical staff at @SBHBronx and Jacobi Medical Center for working hard to save lives right now.”

He added, “I want to offer my prayers to all the families who have lost their loved ones this evening or who are struggling. I ask all New Yorkers to keep them in your prayers, too.”

I want to offer my prayers to all the families who have lost their loved ones this evening or who are struggling. I ask all New Yorkers to keep them in your prayers, too.

Officials said more information about the fire, including what caused it, would be released as soon as it became available.