GOSSIPONTHIS.COM Sports Ray Allen Admitting to Being Catfished by Man Pretending to Be “Attractive... 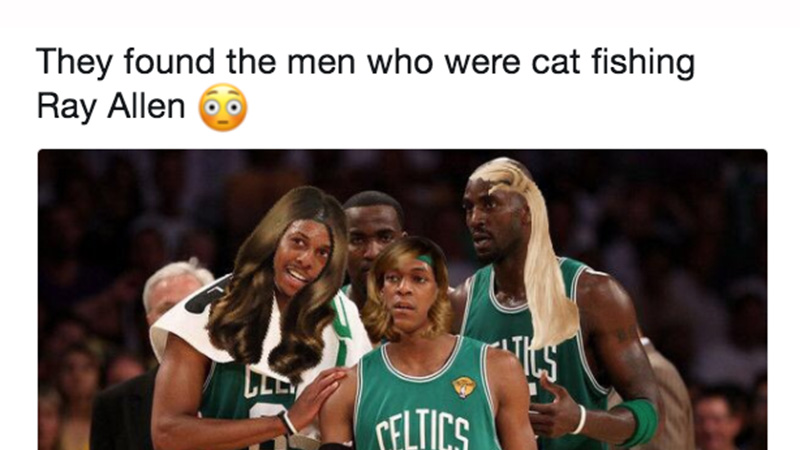 Twitter went crazy over reports that former NBA player Ray Allen is a victim of a catfishing scheme in the year 2017. Like… how though?! You never FaceTimed “her,” bro?!

Allen admitted that he’d unwittingly exchanged a bunch of flirty and sometimes explicit text messages with Coleman, who he believed was a woman. Turns out, Ray Allen (who has been married for almost 10 years, btw) was being Catfished by a man pretending to be “a number of attractive women,” he said.

When Ray realized he was the victim of this impersonation, he terminated these communications. Mr. Coleman, who had become obsessed with Ray even though they had never met in person and even though Ray wanted nothing to do with him, refused to accept an end to their communications.

Coleman continued to post about Ray using various online accounts. Coleman did not limit these posts to Ray. He posted about Ray’s wife, Ray’s children, Ray’s dog, Ray’s homes, Ray’s wife’s restaurant, and numerous other personal items. Coleman not only posted about these things, he would actually post while physically located inside Ray’s wife’s restaurant in Orlando. And he would make sure they knew it, tagging Ray and his wife on those posts.

Allen claimed in the court documents that Coleman threatened to expose their online interactions, the Associated Press reported, and the two eventually “struck a deal to keep everything private.”

However, Allen said that Coleman has reneged on their deal by continuing to harass him and his family via social media in what the 10-time NBA All-Star’s motion described as “cyber-stalking.”

“Ray has not made any contact with Coleman, and most assuredly is not stalking him either in person or online … Ray wants nothing to do with Coleman and merely wishes to be left alone,” the motion read.

“Ray regrets ever engaging with this person online and is thankful they never met in person,” Allen’s attorney, David Oscar Markus, said. “This experience has negatively impacted Ray, and he hopes that others might use his mistake to learn the dangers of communicating online with strangers.”

When Ray Allen’s catfishing scandal hit the internet, people flocked to Twitter to collectively ask “WTF?!” with a bunch of jokes and memes.

Ray Allen out here getting catfished in the year 2017 pic.twitter.com/ib6AFW8FDy

When Ray Allen's comeback that you thought was trending aint about a comeback….? pic.twitter.com/fJ3dkT6WDH

Hoping Ray Allen was coming back to the league then seeing why he’s trending pic.twitter.com/cYIeSe3mwf

*Clicks to see why Ray Allen is trending* pic.twitter.com/ixRURM1moT

Man twitter never disappoints. I just fell out when I seen why Ray Allen is trending. ?????? pic.twitter.com/BftNmbLsZA

When you realize why Ray Allen is trending… and it definitely ain't about basketball pic.twitter.com/v3sHYxFzJL

Ray Allen retired just to talk to women online and get catfished pic.twitter.com/ozX2DXMJj2

Ray Allen should probably only shoot his shot on the court.

When you get that “you up?” text from ray Allen on one of your burner accounts pic.twitter.com/7DqImRe54a

The men who were repeatedly catfishing Ray Allen: pic.twitter.com/mmzSYjq7Fd

Remember when Ray Allen didn’t know how to differentiate tweets and DMs? pic.twitter.com/tc5a5mAb4S

Ray Allen in internet trouble? I for one am shocked pic.twitter.com/ZhNVZkQRPM