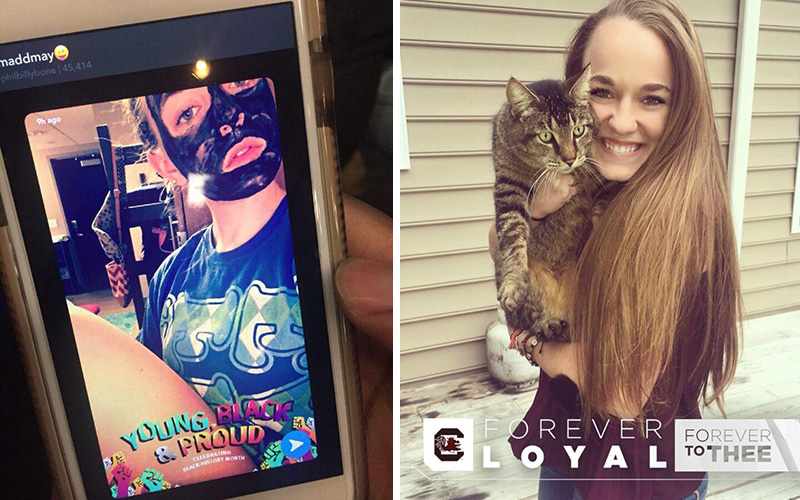 Today is February 1st, which means it’s the first day of Black History Month — the month where Black people get a WHOLE 28 DAYS to celebrate our history and the accomplishments of our people.

To commemorate BHM, Madeline Maynor, a white University of South Carolina student, decided to paint her face black and post a Snapchat, featuring a “Young, Black & Proud” image overlay/filter … possibly as a “joke.”

A photo of the image has been shared on Facebook and is in the process of going viral: “A student at the University of South Carolina took it upon herself to put on blackface and make a mockery of black people and Black History Month. I never speak on it much but there is so much racism and discrimination that goes on at USC and this is not the first incident,” fellow USC (South Carolina) student Whitney Washington wrote in a Facebook post.

“THIS is why it’s important and absolutely NECESSARY to celebrate black History Month. It is a celebration of all of the accomplishments and the struggles we have overcome to better ourselves in this world. However, ignorance is still existent.This girl is an EMBARRASSMENT and I hope the university deals with her accordingly.”

Unfortunately, this is not the first time a college student has shared an image of themselves wearing blackface. Paige Shoemaker, a former Kansas State University (KSU) student, went viral on social media for posting a Snapchat of her wearing blackface with a friend along with the caption “Feels good to finally be a ni**a.” Brooke Merino, a Prairie View A&M soccer player also landed herself in hot water for posing on Snapchat with her face covered in black tape and the caption “When you just tryna fit in at your HBCU.” And a group of four white students at University of North Dakota (UND) posted a Snapchat of themselves in blackface with the words “Black lives matter” written on the post. That same school had gone viral for posting a racist Snapchat reading “locked the black bitch out.” University of South Carolina (USC) has not responded to this latest incident involving their own student, Madeline Maynor, but we will let you know if/when they do.