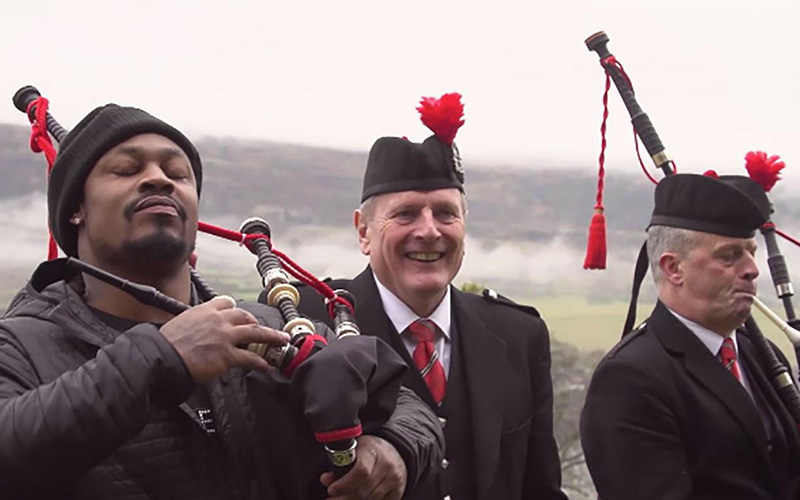 When Marshawn Lynch decided to retire at the end of last season, many people (myself included) greeted the news with a sense of surprise. He was healthy, still one of the best backs in the league, and just one year prior was one bad play call away from a Super Bowl title. And yet, he did retire, stepping away from the game but not out of the limelight.

Turns out, Lynch is a hilarious man and has found a way to live his post-retirement life still entertaining the masses, although now in a much different manner. There was his cameo appearance on FX’s fantasy football series The League, he and Gronk battled Conan O’brien to the death in the Clueless Gamer series, and now, he’s taken his talents abroad as he went to Scotland to spread the word about the upcoming Super Bowl matchup between the New England Patriots and the Atlanta Falcons.

And his journey across the pond is just as entertaining and hilarious as his other post-NFL appearances. Super Bowl LI (51, for anyone not from the Roman Empire) is taking place in Houston, Texas next Sunday (Feb. 5), so it only makes sense that Lynch would travel to Houston to hype the big game. Houston, Scotland, that is.

In the hilarious 3-minute video (below), Lynch is seen talking to locals about the upcoming game, learning a bit more about Scottish culture (never does rock the kilt, though), and handing out an exorbitant amount of his go-to snack, Skittles. Watch for yourself.

As much as every rumor of a Lynch return to the NFL excites me, I’m loving his life post-football. And if he keeps entertaining in this kind of hilarious fashion, I’m A-OK with him cutting his NFL career short.