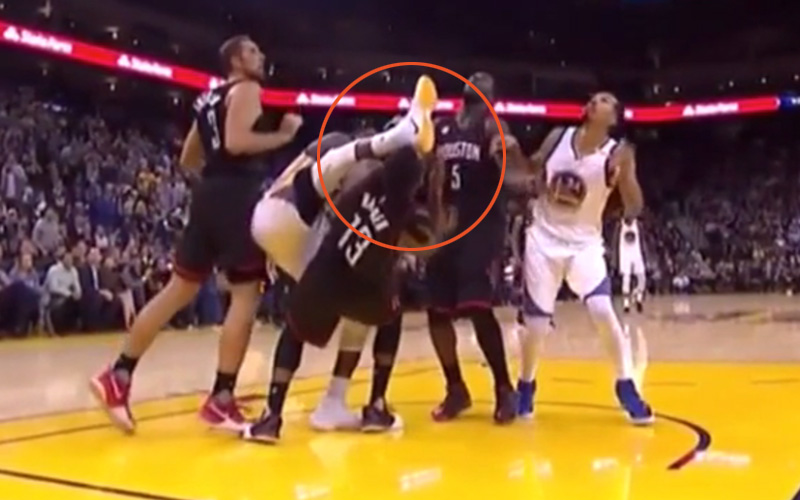 I’ve written about Draymond Green’s proclivity to kicking his fellow basketball players more than any person should have to write about such a thing, but when the NBA instituted what became popularly known as the “Draymond Rule” over the summer, I thought it would be over.

Well, it turns out that was wishful thinking, because less than twenty games into the season, and Green is already back to his old ways. Last night during the second overtime against the Rockets, Green was issued a flagrant foul for doing this:

Draymond's leg gets Harden in the head, assessed flagrant 1 https://t.co/L9OvoJXffO

If I can say one thing, it’s at least he’s stepped up his kicking game, literally. He’s no longer going for opposing players’ reproductive organs, now he’s going straight for the head. The foul ended up contributing to the Warriors third loss of the season as Harden nailed both of his free throws.

And while Green remained calm in the post-game interview, he never outright said that he was at fault or that it was intentional. But later in the night he sent out this Tweet, proving he thinks it’s a big conspiracy against him.

Really, Draymond? You kicked James Harden in the head. And I’ve played a good bit of ball in my day, and I’ve never seen someone’s leg go that high on a shot. That’s more akin to a ballerina stretching than a normal basketball move.

And it’s not even the first time this season that his legs have shown a life of their own. Twice already there’s been somewhat questionable kicks during games. Exhibit A and B.

Who knows, maybe Green suffers from some sort of restless leg syndrome that prevents him from controlling the movement of his limbs. Or, he just doesn’t care and will continue to do this. Whatever the case may be, opposing teams might want to start wearing full on football gear to protect themselves when playing Green in the future.