GOSSIPONTHIS.COM Sports WATCH: Fights in Football Stadiums Are Getting Out of Control 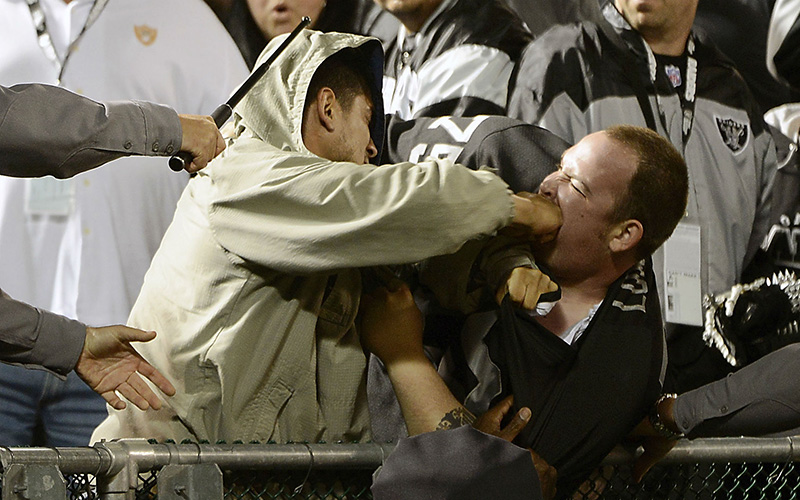 Intense passion for your team, booze, and rivals sitting feet away — it’s a dangerous combination that is seen every Sunday across the country at NFL games. Fans cheering on their teams are quick to turn on fans of the opposing team, whether on the road or at home. And often, it turns violent.

A 55-year-old Baltimore Ravens fan is currently in critical condition after sustaining a head injury during a fight with a pair of Raiders fans this weekend. The fan, Joseph Bauer, apparently got into an argument with the two Raiders fans — Scott Smith and Andrew Nappi — near a concession stand. Bauer was punched and fell to the ground, hitting his head on the concrete.

According to The Baltimore Sun:

Susan Bauer said her brother’s head hit the concrete after he was struck, knocking him unconscious and causing a serious head injury. She said he was in critical condition with a subdural hematoma, which causes blood to pool on the brain.

Doctors have said that Bauer has a 30 percent chance of survival.

This isn’t the first fight to erupt in the stands of NFL games this year, nor will it probably be the last. Multiple fights have broken out in LA with the return of the Rams. But Los Angeles fans aren’t the only ones showing their team spirit a little too aggressively. Fans of the Cowboys, Chiefs, and Raiders have also been caught on film tussling in the stands.

I’m all for rooting on the home team (I mean, if they don’t win it’s a shame, right?) but there’s a line and these people have clearly crossed it. These games are supposed to be fun, and there are children present who just want to enjoy watching their favorite players duke it out in person.

So why don’t we all try to leave the brutal violence on the field rather than off?