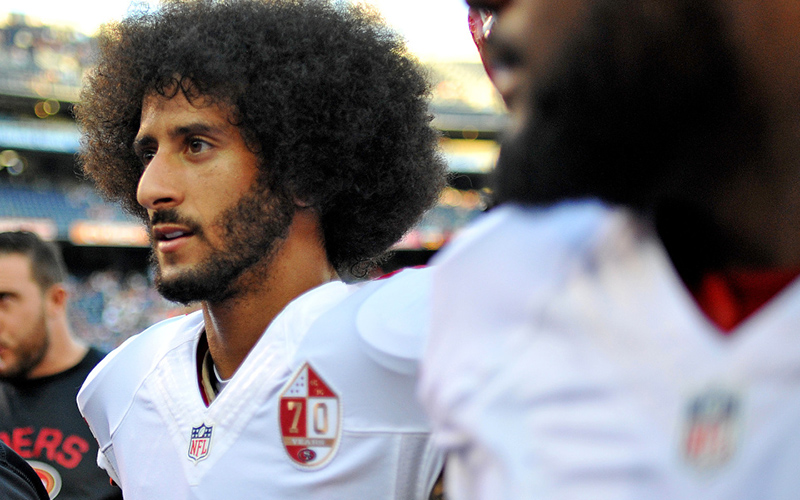 The Kaepernick Chronicles continue as Colin Kaepernick repeated his national anthem protest again last night in San Diego. He once again refused to stand, this time with two more players joining him, proving his unexpectedly talked about protest is growing. And still, many continue to come out against Kaepernick, questioning his methods, his commitment, and even his blackness.

Well, last night after the game he put an end to at least two of those. Showing he’s not just an armchair activist, Kap’s putting his money where his mouth is by saying he will give the first $1 million he makes this season to charities that help communities in need.

And if Kaepernick’s fro wasn’t enough to shut Rodney Harrison up, then the new Twitter trend should be — #KapSoBlack. The Twitterverse has come out in storm today using the popular hashtag to prove Harrison wrong and show just how black Kap really is.

Why Colin Kaepernick look like Bushido Brown from the Boondocks?? pic.twitter.com/T0SHNyc7lZ

Colin Kaepernick looks like Huey from the boondocks pic.twitter.com/BOuLEc2wOZ

When you stop conforming to the oppressor … We're just trying to be free . ???? #KapSoBlack https://t.co/iZrQcFJ3HU

#KapSoBlack that he and Boo Boo da Fool been kicking way back since Cadillacs on fo flats. pic.twitter.com/b8fWMA3fyQ

#kapsoblack Kris Jenner is on the phone with his publicist RIGHT NOW, arranging a date for Kourtney .

#KapSoBlack he got one drawer in his kitchen looking like pic.twitter.com/cH35lUy8pz

Despite all of this, you know people are going to keep hatin’ on Kaepernick and his protest, but yesterday he did a lot to shut down the haters’ biggest complaints with what he’s doing. And while they’ll still bitch and moan about him not standing, at least they can know that that’s not all he’s doing now.

And if nothing else comes from it, this slew of memes made all of this worth it.