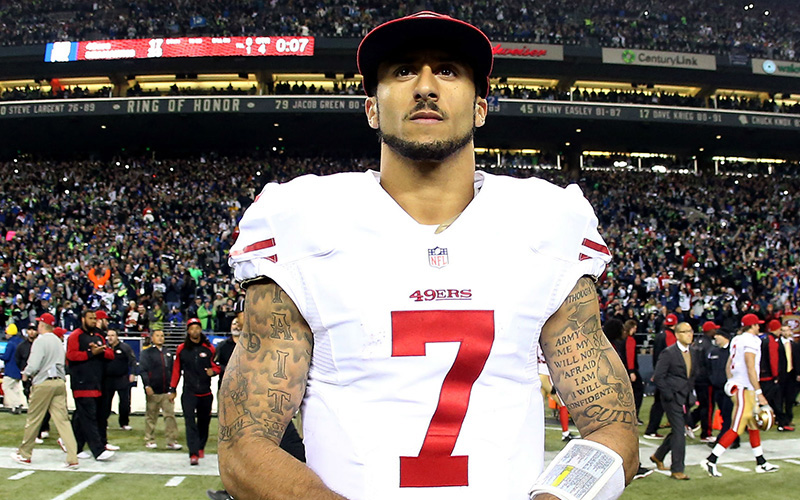 With football season right around the corner, it’s no surprise that stories about the sport are everywhere. Whether it’s Tony Romo breaking his back (again) or the defending champs deciding to start a player who’s never thrown an NFL pass, there’s plenty to talk about for sports fans. But one storyline in particular has dominated the headlines in recent days.

When news broke and everyone started talking about his unpatriotic act, Kaepernick explained his reasoning, saying that he is protesting on behalf of people oppressed because of their race.

“There are a lot things that are going on that are unjust. People aren’t being held accountable for. And that’s something that needs to change. That’s something that this country stands for freedom, liberty and justice for all. And it’s not happening for all right now.”

Apparently he did not expect his protest to get nearly this much attention, but he’s happy he did as it has sparked a conversation. But other people’s opinions on his act are split.

Some are coming out in support of the QB’s decision to use this stage to protest the injustices he sees happening across the country.

Kaep is using his platform & brand to make a compelling & polarizing point, which is his right, even if it's met with ire!#idontagree

The easy thing to do is to make fun of Kap and his play. How about trying to understand where he's coming from….but that would be too hard

Others, however, think he is dishonoring all of the soldiers who have sacrificed to have the right to protest like this, saying he should find a different way to fight the good fight.

Bad decision by @Kaepernick7 but bc of the men/women who died for that flag, he has the liberty to disrespect them #betterwaystogetattention

As Colin said, though, he did this to get people talking about the issues, and even though most of the discussion is focused on him right now, he’s been somewhat successful in that venture. And he’s said that he plans to continue to sit until he sees some change.