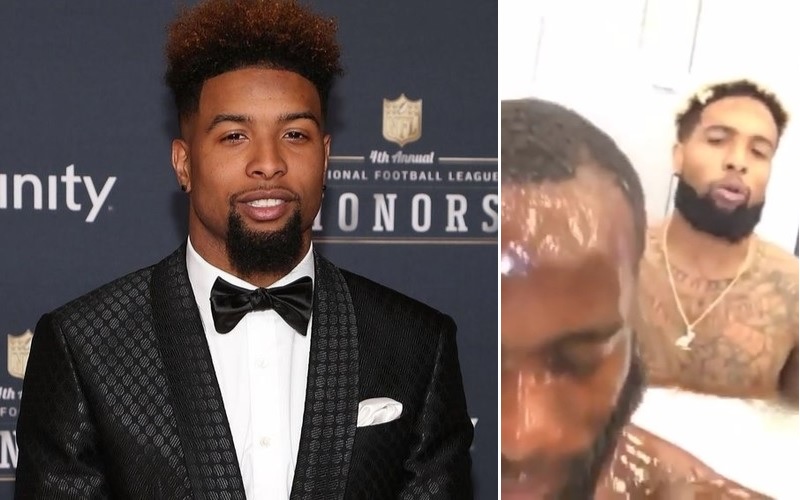 Odell Beckham Jr. is back to making waves again.

The New York Giants wide receiver is currently training for the upcoming season. He decided to wind down in the locker room hot tub (like most athletes) but you know Beckham had to make it a little interesting and he’s somehow sparked gay rumors in the process.

In the short video that has gone viral, Beckham begins singing Marvin Gaye’s classic “Sexual Healing.” At the very end of the clip, teammate Dominique Rodger-Comartie emerges from the water.

This of course got folks on Twitter questioning the football player’s sexuality for the umpteenth time.

Odell Beckham has no shame in hiding those gay rumors. https://t.co/BBdbUlzkOC

If not that Odell video, explain this one? pic.twitter.com/OTKuuyw3uw

Odell beckham is Gay.. What type nigga be singing and have another nigga in the tub come out the water like that .. Nah that ain't right

Speculation surrounding Beckham’s sexuality has been a popular topic of conversation in the past, I guess because he likes to dance and has a goofy personality?!

Those who actually understand sexuality and sexual orientation were quick to defend Beckham while also questioning what makes some straight men have a fragile sense of masculinity.

Speculation around Odell Beckham Jr's sexuality is further proof that straight men LOVE to obsess over other men's sexuality.

Dudes calling Odell Beckham Jr. gay are the same ones who would be terrified to leave him with their girls alone for a half hour ?

Why are men worried about Odell's sexuality though?…… Y'all want him that bad???? I see y'all ? pic.twitter.com/lZ914Kj8H6

Beckham apparently saw all the commotion his clip was causing and responded with a simple tweet.

Back at it again…?

He clearly knows what’s being discussed, but his masculinity doesn’t seem to be as fragile as some. He’s basically trolling the net at this point and having fun. The haters are just gonna have to stay mad and spend their days wondering if this rich NFL star is gay.